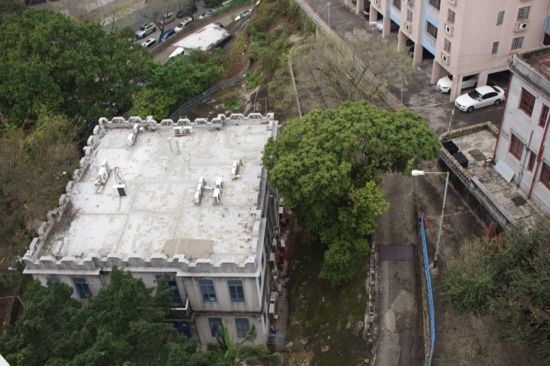 The two buildings beside the public hospital planned for demolition

Lawmakers passed three motions during yesterday’s debate in the Legislative Assembly (AL) requesting further debate on the location of the infectious diseases building, which was planned to be built near the Conde de São Januário Central Hospital (CHCSJ). The proposed location has generated controversy, with many groups and residents opposing the construction, while the government has been stressing the urgency of building the public health facility.
The proposals were raised by Leong Veng Chai, Song Pek Kei, and Au Kam San. Au Kam San wondered why the facility would have to be located in such a densely populated area, instead of Coloane. Moreover, since the discussion regarding the program commenced several years ago, the lawmaker elected by a group linked to the New Macau Association asked why the officials are only urging the facility to move forward now.
Ng Kuok Cheong voiced his support for Au’s motion, saying that the government law enforcement caused citizens to lose confidence. He questioned the necessity of such a big project.
Other lawmakers like Lei Cheng I and Kwan Tsui Hang also supported the motions, saying that if the society is debating the matter, the government should also discuss it.
Physician Chan Iek Lap criticized the lawmakers who disagreed with the location, saying that they did not care about the safety of the nurses and doctors. In response, Pereira Coutinho emphasized again the topic of government transparency, saying that troubles arising from the projects are all caused by the government itself.
Representatives of the Macau Civil Servants Association and the New Macau Association, as well as concerned residents,
held a demonstration last month in S. Francisco Garden and on the rooftop of a residential building to protest the construction of the proposed infectious diseases facility. ANM questioned the necessity of such a large complex, and added that the new Islands Hospital has forecast a similar date of completion to that of the controversial building.
On the government’s part, the Secretary for Social Affairs and Culture, Alexis Tam, has repeatedly said that, after considering population safety and heritage protection, the two buildings beside the public hospital should be demolished to give space for the infectious diseases building.
Plans to build a facility for the treatment of infectious diseases were initially discussed after the 2003 outbreak of Severe Acute Respiratory Syndrome (SARS) in neighboring regions.
The planned building will have an area of 5,565 square meters. The 12-storey building will include 120 wards specially equipped for infection control and treatment of patients, as well as world-class medical facilities. Staff reporter