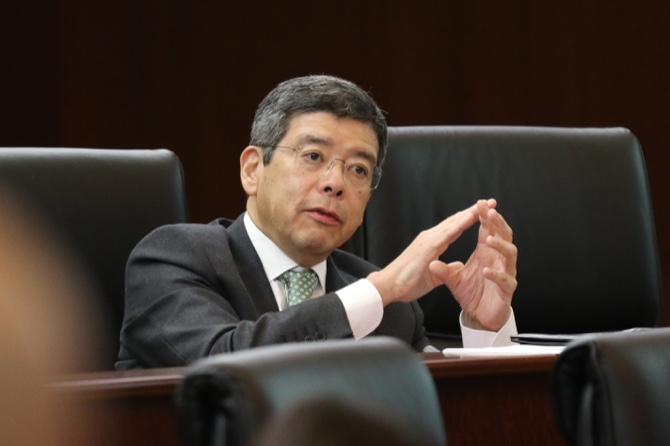 “I receive many unsigned letters every week. If I must handle those matters, I will not have time to work.”, Raimundo do Rosário

Lawmakers questioned Rosário and SMG representatives about matters concerning the SMG’s internal mechanisms during typhoons. The debate motion was passed one year ago, before Sulu Sou was suspended from his position.

“What’s the current stage of the investigation procedures? In 2014, when you started serving in your position, did you hear about the problems inside the SMG? Have you corrected them?” Sou questioned the Secretary.

“How do you ensure the SMG staff is resting? How are you ensuring that the whole SMG staff can participate, equally, in SMG meetings? Are there still situations in which the leaders remotely control the hoisting of typhoon [signals]?” Sou asked.

In response to the pro-democrat lawmaker, Rosário noted that the investigation into Fong’s procedure is still ongoing. The investigation related to Leong has already been completed and the sentence has been executed as well, with Leong currently back working at the weather bureau. Furthermore, he told Sou that he “has heard about a lot of things.”

“However, I said that if you [everyone] have enough evidence, you [everyone] can report the problems to suitable departments,” said Rosario, adding “I receive many unsigned letters every week. If I must handle those matters, I will not have time to work.”

“Whoever has the evidence can go to a suitable department asking for a follow-up,” Rosário told Sou.

Lawmaker Pereira Coutinho criticized the Secretary for these comments. “If [we] report [to the concerned departments] every time there is a problem, the Judiciary Police (PJ) and the Public Security Police Force (PSP) will not need to investigate. The PJ and PSP could simply wait until the residents come forward with a report. This is not right,” declared Coutinho.

“You have to do something. Have you personally done anything? It is your responsibility to supervise your subordinates. Have you investigated? The civil service regulation is still effective: if you find any violation, you can recommend an investigation to the Chief Executive. You didn’t do anything. You look at it as if we are singing. Now you are even more ridiculous, you ask Sulu Sou to report to the Commission Against Corruption. You sit comfortably in your place,” Coutinho criticized.

However, the Secretary continued his comments, remarking that he shares a different opinion than Coutinho.

During the second round of questioning, Sou highlighted Rosário’s responsibility in handling rumors or reports regarding problems within SMG.

“As the top leader, you cannot ignore the problems when you see them. [Problems or rumors] bring [negative] influences to the public departments,” said Sou.

Amid Rosário’s replies to other lawmakers, the Secretary said: “It is a bit odd that nobody wants to be the department head of the SMG. The bureau has a weird structure. There are divisions but there are no departments. We have already initiated a restructuring. It is difficult to find people for some positions. Leaders cannot take money for overtime. [When other workers] take overtime for tens of hours, they end up making more money than heads of divisions.”

The Secretary claimed that difficulties in seeking human resources for his secretariat are a general problem.

Regarding Rosário’s remarks concerning the human resources issue, Coutinho accused all them of “being excuses. If you are willing to hire people, you can hire.”

Besides an additional two automatic weather stations, in 2019, Macau will also have three new water monitoring stations. All these new facilities will be prepared for improved observation of typhoons or typhoon-related natural circumstances.

In addition to this collaboration with mainland China, the local weather authority is also working with the Hong Kong Observatory, which is providing real-time water and wind statistics to Macau.

In terms of improved preparation for typhoons, the SMG will also update both its website and apps.