AL2021 with the lowest turnout rate ever 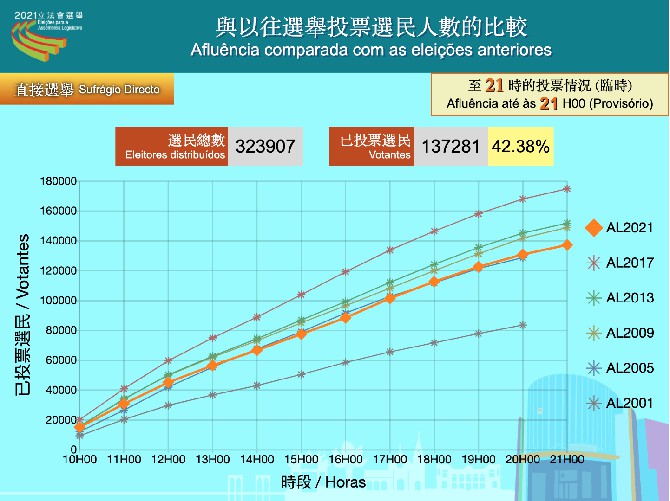 The elections for the seventh Legislative Assembly (AL2021) have registered the lowest turnout rate ever with only 42.38% of the voters showing up at the polling stations. The previous record low was recorded precisely 20 years ago in the year 2001 when the turnout was almost 10% higher (52.34%).
In a press briefing held last night after the closing of the polling stations, president of the Legislative Assembly Electoral Affairs Commission (CAEAL), Tong Hio Fong blamed the pandemic for the low turnout.
“This [situation] has never happened before. This election took place under the pandemic situation and I believe it has brought an impact to the [turnout] result,” Tong said.
“We have preliminarily analyzed that the epidemic has severely affected this election because many people could not return to Macau [to vote] due to the pandemic and the measures enforced to control the pandemic also affected the voting intention of the voters and so these are the main factors.”
Questioned specifically whether the disqualification of several groups from the election could have contributed to the low turnout since people decide not to vote as their preferred candidates have been disqualified, Tong said, “Each voter has the right to decide and vote according to their intention. According to CAEAL’s understanding this is not the main factor [for the low turnout],” but adding, “We believe that there might be citizens who had such thought but we also still believe that the pandemic is the main cause.”
The president of CAEAL took the opportunity to thank all voters who have participated in the elections despite the prevention and control measures at the polling stations.

7,000 voters in indirect elections
On the indirect elections, a total of 7,000 voters have exercised their right to elect the 12 candidates running to an equal number of seats. In this election, the turnout was far higher reaching 87.33%, the second-highest turnout for indirect elections after the elections of 2017 when the turnout was 91.67%.
The Labor sector was the one that scored a higher turnout with a total of 1,101 voters out of 1,127 (97.69%) exercising this right.
The most voted candidate was Chan Chak Mo, representing the Cultural and Sports sector with 2,317 votes, followed by Ho Ion Sang, elected in representation of Social and Education sector with 1,775 votes.