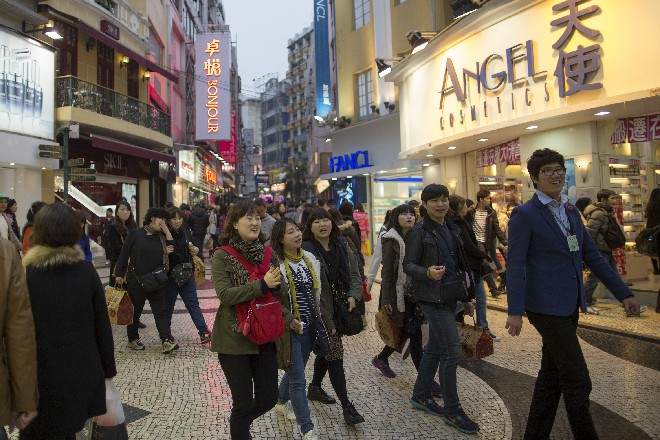 The National Immigration Administration of China has set a date for the general resumption of tourist visas for traveling to the Macau SAR. From September 23, any resident of the mainland will be able to apply to visit Macau for tourism purposes.
The timing positions Macau for a recovery bounce during China’s Golden Week in early October, a normally popular time in the Macau gaming calendar.
Before then, all residents of Guangdong Province will be able to apply for a tourism visa to Macau starting from August 26.
The Individual Visit Scheme (IVS), popular with gamblers from the mainland, is included in the resumption, as is the general group tour scheme.
The resumption only applies to the Macau SAR but not the Hong Kong SAR.
The announcement comes just one day after Macau’s Novel Coronavirus Response and Coordination Center announced that residents of Zhuhai could once again apply for a tourism visa to travel to Macau. The move is seen as the first stage of a gradual reopening of the tourism trade between Macau and the mainland, after months of near-zero levels of visitation.
“Starting from August 12, the immigration department of the Zhuhai police authority will resume issuing Macau tourism endorsements to Zhuhai residents,” a statement from the National Immigration Administration of China said. “If there are no special situations, starting from August 26, the immigration department of the Guangdong police authority will resume issuing Macau tourism endorsements to Guangdong residents.”
Those applying for the IVS will still need to present a negative Covid-19 virus test obtained within the past seven days and a green health code to be granted a visa. Mainland residents traveling from high-risk areas may be excluded from entry, according to official reports.
Macau’s gross domestic product, heavily reliant on the tourism and gaming industry, shrank 49% in the first quarter of this year. Even though casino operators reopened after an unprecedented 15-day shutdown in February, travel curbs meant tourists and high rollers couldn’t get there.
The latest moves are a “huge step in the right direction,” George Choi, a Hong Kong-based analyst at Citigroup Inc., wrote in a note yesterday.
Still, Sanford C. Bernstein analysts led by Vitaly Umansky cautioned that there is a risk that visa issuances could again be suspended if there is a jump in Covid-19 cases.
Mainland China accounts for about two-thirds of Macau’s monthly arrivals, with about 40% coming from the nine mainland cities within the Greater Bay Area.
Last year, the total number of Chinese IVS visitors was nearly 13.1 million, the largest number of IVS visitors in a single year. In 2017 and 2018, the city registered respective totals of 10.6 million and nearly 12.3 million tourist arrivals respectively under the scheme.
It remains to be seen just how quickly Zhuhai residents will be able to obtain travel permits because of the normal administrative irregularities associated with public service procedures. It will also depend on the application method used by the mainland residents.
Travel endorsements are normally issued either manually or by self-service. Individuals can either submit their applications in paper and wait for several days to get a permit, or they could apply for an endorsement at a self-service kiosk and print the visa immediately.
Even though Zhuhai will start issuing visas again today, it still is unknown which of the methods will be available.
According to the official bulletin, the National Immigration Administration recommends that applicants make an appointment online first and then submit their application to the office of the concerned police department. Daniel Beitler & Julie Zhu

Searching on Weibo, hundreds of people commented on a post by the official CCTV News account regarding the resumption of travel endorsements. “Macau, I still support. Hong Kong? Let it calm down for a while,” one commenter wrote in reference to the fact that the neighboring SAR remains excluded from the policy change. Many also wrote “Macau, the good child”, a common expression to describe the comparatively low level of political dissent in Macau. Some netizens were asking about the details of the arrangements at the borders. They wanted to know if Covid-19 tests were still needed to enter Macau. Others discussed what they could do while visiting Macau. “What am I going to do in Macau?” one netizen wondered. “There is no need to travel to Macau a second time, once is enough,” another user wrote. In response some people said they would like to come to Macau to “eat and to go shopping.”