Analysis | The Right to Information 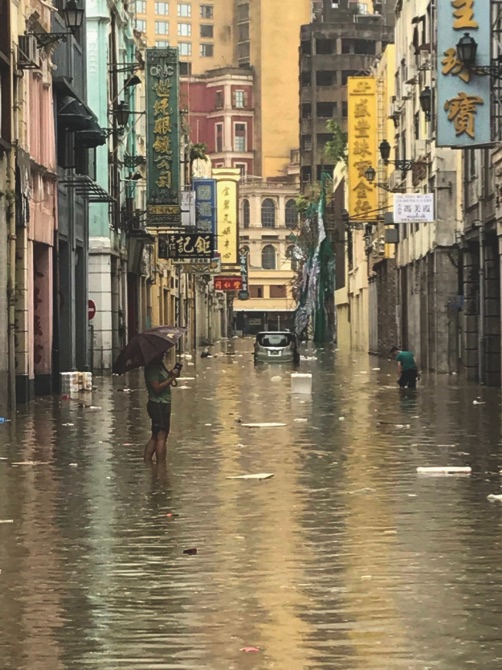 “Where there is lack of institutions for managing information and the political will to make information available, information professionals are unlikely to have a conducive environment in which to practice their skills. Well established institutions would stimulate the use of information and facilitate the acquisition of skills required to use information to advantage. It takes time to uproot the culture of impunity and non-accountability. This requires long term investment and commitment to promote a culture that appreciates information and makes it readily available to citizens.” (Svärd, 2017)

1.  Macau’s public has been confronted with news of four journalists from Hong Kong who were refused entry to Macau in the last week. It was reported that they intended to cover the devastating consequences of Typhoon Hato. In response to this impediment to a legitimate exercise of the journalists’ profession, various associations of the press from both Macau and Hong Kong made their protests heard.

2.  The documentation presented to the journalists regarding refusal of entry give reference to reasons of public safety. Asked to clarify, the Secretary for Security, Wong Sio Chak, summarized in a press conference as follows: (1) the cases are confidential and the reasons cannot be disclosed; and (2) that it is not a case of professional persecution since the authorities have not concentrated on any single profession.  At the same time, the coordinator of the Civil Protection Operations Center of Macao revealed that “in principle,” there is an entry ban on people who “could endanger the public order” [Hoje Macau 28/08/2017, p.5], and that the “Government and military personnel greatly respect the freedom of the press,” therefore “we have press conferences almost every day” [Ponto Final, 28/08/2017, p.4].

3.  The number of cases of refusal of entry into Macau has been increasing, and the reason is still not clear nor who is making such orders. There are also situations where people are requested to leave after gaining entry. In some situations, and even when they are Chinese citizens coming from another SAR of China, it is important to question the compatibility with the text and spirit of the Basic Law of Macau of  (a) this prohibition of entry and (b) the failure to clarify the rationale propped up by an argument of confidentiality. That is, whether the decisions respect freedom of the press, the right to information and the fundamental rights and duties of residents.

4.  Article 18 of the Basic Law states that in addition to the Basic Law, the laws in force in the MSAR are those previously in force in accordance with article 8, and those determined by the legislative body. Of the national laws of the PRC, only those in Annex III of the Basic Law are applicable to Macau, none of which deals with the subject matter here.

5. It should also be borne in mind that the Basic Law enshrines the freedom of expression and freedom of the press for residents, guarantees the applicability in the MSAR of the provisions of the International Covenant on Civil and Political Rights and that non-residents enjoy equal rights and freedoms as granted and guaranteed to residents (see articles 27, 40 and 43 of the Basic Law).

6.  In turn, the Chief Executive (CE) has the obligation to enforce the Basic Law and other applicable laws in the MSAR, as well as “to comply with the guidelines issued by the Central People’s Government in relation to matters provided for in the Basic Law” (See article 50).

7.  Of the set of laws in force in Macau subordinated under the Basic Law and related to the above issues, the Law of the Press (Law no. 7/90/M) must also be taken into account, as too must the Chief Executive’s dispatches on the exercise of freedom of the press and the right to information.

8.  It can then be said that while the Basic Law expressly and unequivocally sets down the freedom of the press, it does not establish any right to information. However, this right is referred to in clear terms in article 3 of the Press Law, expressed as a right “to inform”, “to seek information” and “to be informed”, which includes “freedom of access to sources of information”.

9.  This formulation is in line with what constitutionalists Gomes Canotilho and Vital Moreira point out when, in an annotation to Article 37 of the Portuguese Constitution, they state that the “first [right to inform] consists […] of the freedom to transmit or communicate information to others, disseminating it without any impediment; but it may also have a positive  form in the right to inform, that is, the right to the means to inform others.”

10.  In turn, the right to become informed “consists, in particular, of the freedom to collect information, to search for sources of information, that is, of the right not to be prevented from being informed […].”

12.  As a “manifestation of the freedom of expression of thought,” the right to information has also been accepted by the International Covenant on Civil and Political Rights (ICCPR), which is currently in force in the MSAR. This right encompasses the freedoms “to seek, receive and be updated on information” (art. 19, no. 2), although it may be restricted upon grounds of “safeguarding national security and public order.”

13.  The Chief Executive of MSAR, in the preamble to the CE Dispatch 145/2002, stated that he considered the “media indispensable to the exercise of fundamental rights in a democratic and pluralist society.” Thus, he emphasized the irreplaceable role of the press in “the development of society and the promotion of social harmony,” which is why he was concerned with “enhancing the independence of the right to information vis-à-vis political and economic powers.”

14.  In this legislative context, the decision to prevent the entry of journalists from Hong Kong to the Macau SAR seems incomprehensible, since it appears to be in flagrant violation of what is postulated and therefore appears incompatible with the text and spirit of the Basic Law and other laws in force.

15.  Having partially answered the first question above, it is now necessary to verify, before issuing a final judgment, whether the failure to explain the reasons for the prohibition upon grounds of confidentiality is permissible.

16.  On this point, the official documentation presented to those targeted only mentioned internal security reasons, which itself clearly provides insufficient information to understand the motivation for the political and administrative power behind the decision being issued. It is true that the ICCPR provides for a restriction of the right to information in order to safeguard national security and public order, but this point could and should have been clarified by the Secretary for Security.

17.  For Macau’s public opinion  and for those targeted, i.e. professional journalists on duty – who, as far as we know came without criminal record, since otherwise public authorities would not fail to provide this information – it seems strange that there could be reasons to recommend an approach so drastic as to impede their entry and the exercise of their profession.

18.  It is not clear whether a journalist on a mission or a photographer from Hong Kong, a Chinese citizen, would jeopardize the safety of the MSAR simply by taking photographs of the garbage in the streets, fallen trees or public facilities, by having free access to uncover all its deficiencies of design, construction and oversight, trying to speak with local citizens and with the political and/or administrative representatives to obtain clarification. What was decided, and the way it was, jeopardized all the work that has been done in the MSAR in defense of the “second system” and forgets the investment that has been made by the taxpayers in the form of government subsidies to the Chinese and Portuguese press to defend the freedom of the press and the right to information.

19. In line with the aforementioned constitutionalists’ words, in the absence of a clause restricting the rights in question, it would be important for the rights to be harmonized “subject to methodical balancing or weighting” alongside other potentially conflicting benefits and rights. And further, what happened requires prompt explanation to those targeted and to the public, without formal subterfuge, so that the decision leading to impediment would not be seen as excessive given the circumstances, and therefore unfounded, perfectly arbitrary and abusive.

20.  If we consider, according to J. C. Vieira de Andrade, that press freedom – and the right to information as one of its corollaries – is part of the core of the subjective fundamental rights guaranteed by the Basic Law, then things cannot happen as they did, let alone happen again in the future. In addition, those targeted are residents of a neighboring SAR, which forms an integral part of the PRC, and are also subject to the rule of law and benefit from the guarantees of the “second system”, including freedom of the press and access to sources.

21.  More than a right, press freedom is “a complex or constellation of rights and freedoms” (G. Canotilho and V. Moreira, 2017), a “right of defense before the public authorities” and a “constitutional guarantee of the free public opinion.”

22. Mere reasons of confidentiality, which are unknown and are not minimally justified, are still insufficient. Perhaps more serious, is the affirmation that other professional classes and people are being targeted without knowledge as to why. What did these citizens do that was so serious? What sort of reasons are these, especially when it is known that in the MSAR “the socialist system and policies do not apply” (art. 5 of the Basic Law), which according to art. 31 “of the Constitution of the People’s Republic of China […] the systems guaranteeing the fundamental rights and freedoms of its residents […]”  (art. 31) are based solely and exclusively on the Basic Law and these are extended to “individuals who are not residents of Macau,” but who, if they are in the MSAR, “enjoy, in accordance with the law, the rights and freedoms of the residents” (see art. 43)?

23.  I admit that there is an excess of voluntarism  (going beyond what is required by-law and even common sense) on the part of the public authorities, especially as not everyone is from the same background and the environment in which they were educated is not governed by the same standards of freedom and skepticism. But as long as there are good intentions – and I believe there to be good intentions for the MSAR and the progress of the PRC – too much voluntarism can be curtailed, the mistakes corrected, as mandated by good Confucian ethics, and the institutions, laws and procedures enhanced.

24.  What is not to be condoned is that in the “second system” there are some entities that behave as if they were in the frame of the first system, ignoring the differences between one and the other, tarnishing the image that is transmitted outside of the MSAR and its institutions, thinking that the simple motto “I want, I can and I command” is enough, thus ignoring the demands of transparency and legitimate scrutiny of discretionary acts of power.

25. The respect for the exercise of press freedom, the legitimate right of access to sources and the guarantee of the right to information, in its various forms, does not involve the convening of press conferences where nothing substantial is clarified, with obscure decisions or apologies, and then simply moving on, trampling on fundamental rights guaranteed by the PRC and the Basic Law, which are part of the cultural, legal and civilizational heritage of the Macau SAR.