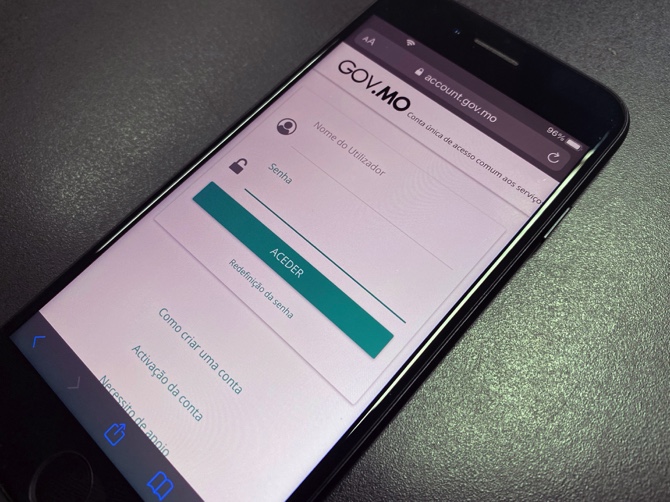 The implementation of expansion measures for the electronic government (E-Gov) system are currently being prepared and will be rolled out during the first half (H1) of this year, the Secretary for Administration and Justice André Cheong said yesterday at the Legislative Assembly (AL).

Cheong attended the AL to respond to several spoken inquiries from the lawmakers on the second consecutive day of Q&A with the government.

When asked by lawmakers about the progress of the E-Gov’s development, the Secretary revealed that an updated version of the My Government Account system (individual accounts) will enter into force around April or May this year, with added services.

“Until now, nearly 300,000 people have opened accounts in My Government Account system, and the system’s ‘2.0 version’ will be launched in April or May this year,” Cheong said.

“We will increase [the functionality of] several services, including the payment of traffic violation fines, licensing, and others.”  Cheong remarked that it would soon be possible to use this method for paying for utilities such as electricity and water.

Lawmakers asked to hear about the government’s plans for further developments of the system, and called for the faster implementation of online and non-essential services.

On the topic, lawmaker José Pereira Coutinho mentioned the example of Estonia, where the physical presence of staff performing bureaucratic tasks is limited to marriage, divorce, and Real Estate transactions. He noted that all other services and tasks can be done online.

In response, Cheong said that the government hopes to promote a simplification of the processes of both marriage and divorce next year, implementing a series of electronic related services.

Cheong said that the purpose of E-Gov is “not to simply pass from paperback to online services and digital files but, most importantly, to review and optimize the bureaucratic processes and approval procedures to increase the overall efficiency.”

Another matter concerning which lawmakers made inquiries was administrative reform. The Secretary said that “early this year” the executive will finally move ahead with the reorganization of the Infrastructure Development Office (GDI).

Cheong noted that, since last year, the restructuring, merging, and extinction of several departments has been ongoing. This will continue this year, starting with the GDI, a long-awaited measure by the Secretary for Transport and Public Works Raimundo do Rosário, now finally underway.

Cheong also noted that the government is currently avoiding, as much as possible, the establishment of non-permanent projects or task forces as has occurred in the past. These types of bodies include the Energy Sector Development Office, the Tourism Crisis Management Office, Protocol Office, and others of the same kind that have been restructured and merged into other services over the last couple of years.

The Office for the Planning of Supervision of Public Assets (GPSAP) will continue operations. The Secretary for Administration and Justice said explained this decision by saying that it serves “an important role in supervising public assets and public capital enterprises.” The Secretary also said that the office, led by the former Secretary Sonia Chan, is also currently working on a completely new regime to regulate the relevant matters, which is approximately hallway towards finalization.

Restructuring will be also expected to begin soon for three other projects. These are: the Human Resources Office, the Financial Intelligence Office, and the Supporting Office to the Permanent Secretariat to the Forum for Economic and Trade Cooperation between China and Portuguese-Speaking Countries.

At the AL, Cheong said that these three offices will either be merged into other existing entities or re-established independently within the course of this year.

In a review of the work completed, Cheong detailed the 15 departments — including sectors of the economy, tourism, education, culture, and information — that have been reorganized. Furthermore, six departments have been abolished, and only two new departments have been created. Cheong recalled that, currently, the government is also intending to restructure several public autonomous funds.