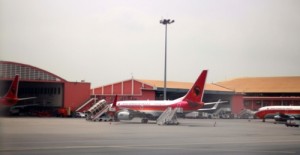 The Kenyan government recently signed a new two-way air aviation agreement with its Angolan counterpart that will allow Angola’s flagship airline to start flying to Nairobi, the Kenyan press reported.
The agreement signed last week is a review of the aviation agreement signed by both governments in 2011, under which Kenya Airways started flying to Angola.
The Kenyan airline currently offers three direct flights a week between Nairobi and Luanda, and the Kenyan Minister for Transport and Infrastructure, Michael Kamau, said he would like Kenya Airways to increase the number of flights between the two cities and that Linhas Aéreas de Angola should do likewise.
Meanwhile the outgoing Kenyan ambassador to Namibia who is also accredited in Angola, Peter Gitau, said in Luanda that his country wanted to establish a permanent embassy in Angola, “in order to strengthen bilateral diplomatic relations.”  MDT/Macauhub