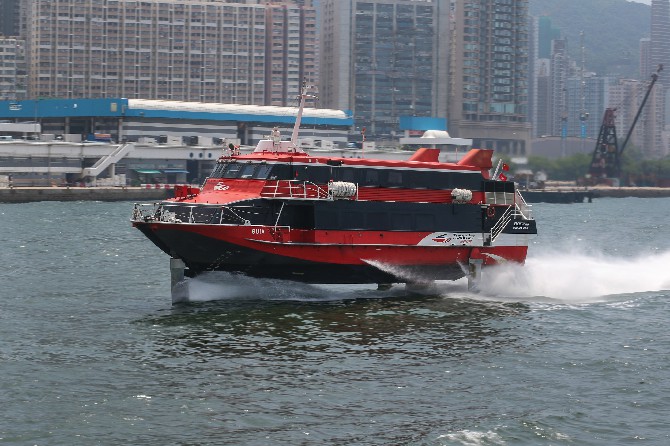 Another jetfoil vessel has reportedly been dismantled at Hong Kong’s Wang Tak shipyard, the jetfoil Conservation Concern Group has said in a statement.
According to the same group, the dismantled jetfoil is Urzela. The group also noted that two other jetfoils (namely Pico and Guia) will be the next in line.
“After being retired in December 2018, jetfoil Urzela was moved to Wang Tak, the same shipyard that scrapped Balsa and Santa Maria. Currently, the hull number, the vessel name, and the company logo have been covered with paint, anticipating that Urzela is very close to an end,” the group said in the statement.
The group, which is knowledgeable of the history of this type of vessel, said that the “Urzela” has served on the Hong Kong-
Macau ferry route since 1980 after an initial life serving on the route between the Canadian city of Victoria, British Columbia, and the American city of Seattle, under the name of “Flying Princess,” since 1976.
Following that stint, the vessel headed to Europe and served for some time on the route between the cities of Zeebrugge, Belgium, and London, UK.
In 1979, a new jetfoil line connecting the UK and France was established and ran by a jetfoil named Normandy Princess (later Terceira), while Flying Princess (later Urzela) assisted during peak seasons.
Records show that the last trip from TurboJet-owned Urzela took place on the afternoon of December 21, 2018. Following that, the vessel had been stored in Hong Kong Shipyard in Tsing Yi, together with Pico and Guia, the other two vessels also retired in 2018.
The acknowledgment that Urzela and another two vessels are to be scrapped helps cement the idea previously aired by the group that there are “growing concerns that once-proud jetfoil fleet will never resume service” after the lifting of the travel ban between the two Special Administrative Regions.

Affected by a passenger shortage since the opening of the Hong Kong-Zhuhai-Macau Bridge the ferry services were forced to halt services for over one year due to the Covid-19 pandemic.
[UPDATED]