Antarctica waters | Protesters in contempt of court for anti-whaling campaign 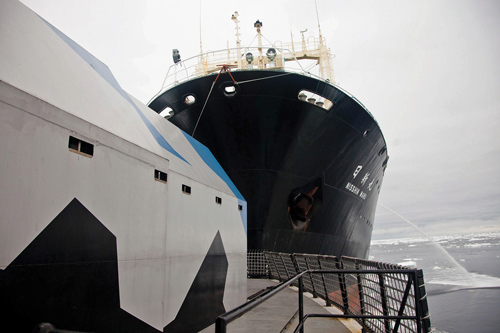 Radical environmentalists who threw acid and smoke bombs at Japanese whalers were found in contempt of court last week for continuing their relentless campaign to disrupt the annual whale hunt off the waters of Antarctica.
The 9th U.S. Circuit Court of Appeals ordered a commissioner to determine how much Paul Watson and members of the Sea Shepherd Conservation Society he founded owe Japanese whalers for lawyer fees, damage to their ships and for violating the court order to stop their dangerous protests.
The Japanese whalers are demanding USD2 million in addition to their attorney fees and damage and cost to their ships for warding off the protests.
The environmentalists’ exploits have been documented on the long-running Animal Planet reality TV series “Whale Wars.”
Sea Shepherd said in a statement it is disappointed with the ruling and considering its legal options.
“We are considering our legal options at this time, including the possibility of an appeal,” it said.
In 2012, the court ordered Sea Shepherd to stay at least 500 feet from Japanese whalers and to halt dangerous activities like attempting to ram the whalers and throwing smoke bombs and bottles of acid at their ships. The crews of Sea Shepherd ships also drag metal-reinforced ropes in the water to damage propellers and rudders, launch flares with hooks, and point high-powered lasers at the whalers to annoy crew members.
The Japanese whalers filed a lawsuit in Seattle in 2011 seeking a court order halting the Sea Shepherd’s campaign.
The 9th Circuit in December 2012 ordered the Sea Shepherd’s to stop harassing the Japanese fleet and for the group’s four ships to stay at least 500 feet from the whalers.
Watson then transferred all of Sea Shepherd’s U.S. assets to foreign entities controlled by the group. Sea Shepherd has organizations in Australia, Belgium, France, Germany, the Netherlands and the United Kingdom.
Watson also stepped down from the board of directors of Sea Shepherd organizations in the U.S. and Australia. Sea Shepherd Australia took over management of “operation zero tolerance,” the group’s annual harassment campaign of the whalers in the Southern Ocean.
Watson also resigned as captain of the Sea Shepherd’s flagship the “Steve Irwin,” but remained aboard as an “observer.”
In February 2013, the 9th Circuit appointed a commissioner to investigate whether Watson and members of the Sea Shepherd should be held in contempt. The commissioner concluded on Jan. 31 that the Sea Shepherd wasn’t in violation of the court order because the harassment campaign was being managed outside the United States. The same month, the group’s “Steve Irwin” vessel with Watson aboard collided with a Japanese whaler.
On Friday, a three-judge panel rejected the commissioner’s findings. The 9th Circuit ruled that the transfer of assets and control of the Sea Shepherd to Australia and other countries didn’t change its 2012 order to the group to cease its dangerous activities.
Contrary to the commissioner’s conclusions, the 9th Circuit said Watson and the Sea Shepherd’s U.S. affiliate could be found liable for aiding and abetting the organization’s foreign offices to violate the court’s injunction.
“Sea Shepherd U.S. is liable because it intentionally furnished cash payments, and a vessel and equipment worth millions of dollars, to individuals and entities it knew would likely violate the injunction,” Judge Milan Smith wrote for the unanimous panel. The court ordered the case sent back to the commissioner to determine how much the whalers are owed. By Paul Elias, San Francisco, AP