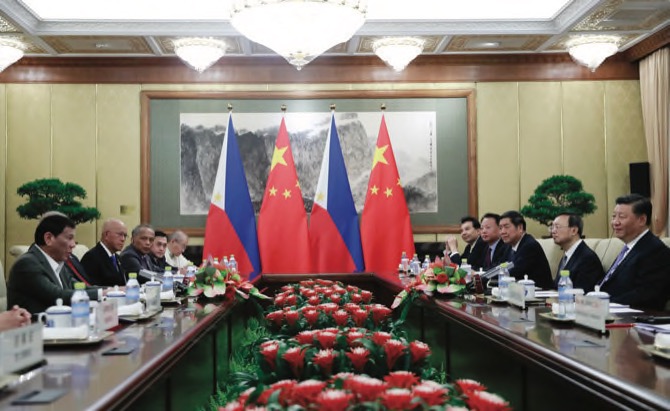 The Philippine president has acknowledged he’s short of solutions to press China to adhere to Manila’s arbitration victory in their South China Sea disputes after he said Chinese President Xi Jinping told him flatly: “We will not budge.”

President Rodrigo Duterte spoke for the first time about his talk with Xi about the thorny disputes in a televised news conference Wednesday night where he was asked what move he would take next. Duterte, who has nurtured friendly ties with China, met Xi in Beijing last week.

“They’re claiming it as their own and the bad part is that they are claiming it as their historical right and they have the control over the property,” Duterte said. “That’s our problem […] If you can help by suggesting, is there any other suggestion? Or have you heard of any sane solution short of going to war with China saying, ‘we will not budge’’’?

The Philippine leader has long been criticized by nationalists and left-wing groups for not immediately demanding Chinese compliance with a 2016 ruling by an arbitration tribunal in The Hague that declared China’s claims to virtually the entire South China Sea invalid under the 1982 U.N. Convention on the Law of the Sea.

The ruling also upheld the Philippines’ sovereign rights over a wide stretch of waters called the exclusive economic zone, where Chinese territorial claims have delayed for years Manila’s plan to explore and extract potential undersea deposits of oil and gas.

Duterte said he raised the arbitration ruling in a meeting with Xi and other Chinese officials and he quoted the Chinese leader as replying almost in a whisper: “You know, our statement was ‘We will not budge.’ We don’t want to discuss that because it’s ours. We own the property. Why should we talk to you?”

Duterte said he reacted by telling Xi that, “It will remain a problem. It will be […] just like a sore thumb that sticks out painfully every day.”

Xi at that point tried to shift from the topic, and Duterte said he did not press on, knowing the Chinese president has been preoccupied by anti-government protests in Hong Kong.

“Out of courtesy, I said, ‘Well, I will not, maybe, insist on your answer now. I am not satisfied with your answer, but I will not ask for any other answer. I’ll just remain where I am, where I started considering that you are under stress by the incidents in Hong Kong.’”

“They have a problem so he’s hot-headed. We should time it. You know, the art of diplomacy,” Duterte said. “If a person loses a child or is left by his girlfriend, he’ll really be hot-headed.”

Duterte then again said he only inherited the problem of the Chinese taking over the Scarborough Shoal from the previous administration, which he said had withdrawn Philippine ships from the contested shoal after a long standoff and allowed Chinese ships to take control of the territory.

“This is not my problem. Who withdrew?” he said.