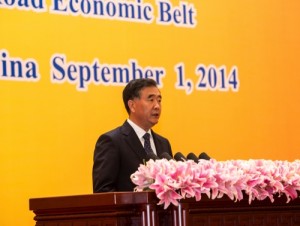 Chinese vice premier Wang Yang is in Macau to participate in the Asia-Pacific Economic Cooperation (APEC) 8th Tourism Ministerial Meeting (TMM8), which will be held tomorrow. He is attending a welcome dinner today, arranged by the Macau government.
Wang Yang is also due to meet with Macau’s Chief Executive, Mr Chui Sai On, and representatives of 21 APEC economies. He will return to Beijing tomorrow night, said the government in a statement.
APEC’s 8th Tourism Ministerial Meeting, which China is hosting for the first time, will be held tomorrow at the Macau East Asian Games Dome. 152 participants, including tourism ministers and representatives of 21 APEC economies, will gather tomorrow to discuss future tourism policies for the Asia-Pacific region.
Delegates from the APEC Secretariat, the United Nations World Tourism Organization (UNWTO), the World Travel and Tourism Council (WTTC), the Asia Pacific Travel Association (PATA) and the APEC Center for International Sustainable Tourism will also attend the event.
Hosted this year by the China National Tourism Administration (CNTA), the meeting is being organized by the MSAR. The government assured it has devoted great attention to arranging the event, paying close attention to conference facilitation, human resources allocation and security.
With China being the host country, it helps to broaden and enhance the international influence of China’s tourism, and at the same time, promote future co-operation and development between Macau and other economies, thereby assisting the region to become an internationally-
renowned hub for tourism and leisure.
In a series of interviews given on Tuesday, APEC countries’ representatives said that discussions would focus on smart tourism, taxation and connectivity.
Mr Javier Guillermo Molina, from the Ministry of Tourism of Mexico, said that connecting such expansive regions is one of the greatest challenges APEC economies must face.
One of the event’s key achievements is the signing of the Macau Declaration –
an agreement that Mr Javier Guillermo Molina said it should capture future trends and policies on tourism in the region.
APEC’s secretariat representative, Mr Pangeran Ibrani Situmorang, said on Tuesday that delegates have discussed a wide range of matters in the past few days, from smart and low-carbon tourism, to tourism market integration in the Asia-Pacific region, as well as focusing on integration between tourism and other local industries.
The Macau Government Tourist Office, the Public Security Police, the Government Information Bureau and the Protocol, Public Relations and External Affairs Office have stepped up efforts to, “ensure a smooth and stable progress in preparing and coordinating works.”
The organizing committee has also recruited 66 student volunteers from four local educational institutions, who are fluent in different languages and possess a sound knowledge of Macau.
The Macau government is hosting a “Macau Night” this evening, offering a welcome dinner to APEC representatives and other guests. The dinner also aims to show Macau’s unique combination of Eastern and Western cultures. A Chinese-Portuguese ensemble will be performing and booths showcasing Traditional Chinese handicrafts will also be erected.
The event this evening also includes a large-scale light show featuring famous tourist attractions of various APEC economies.
Some 300 journalists representing 63 media organizations from 10 countries and regions are registered to cover the meeting tomorrow. CP