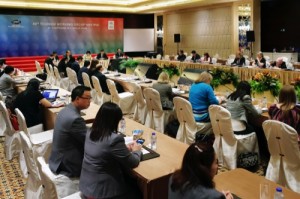 A tourism workshop was held yesterday at the Four Seasons Hotel

Delegates to the Asia-Pacific Economic Cooperation (APEC) 8th Tourism Ministerial Meeting (TMM8) are arriving in Macau, with many of them having already taken part in a meeting and a tour of some of the island’s main attractions yesterday.
Hosted by the China National Tourism Administration (CNTA) and organized by the MSAR, TMM8 will be held on September 13.  According to a press release issued by the Government Information Bureau, preparations for the meeting “have been finalized regarding venue arrangements, hospitality for visiting delegations, media coverage and security work.”
A total of 152 attendees, including the tourism ministers and representatives of 21 APEC economies, delegates from the APEC Secretariat, the United Nation World Tourism Organization (UNWTO), the World Travel and Tourism Council (WTTC), the Asia Pacific Travel Association (PATA), and the APEC Center for International Sustainable Tourism, have already registered for the event. Around 300 journalists from local, mainland China and overseas media organizations have also registered to cover the meeting.
Prior to the opening of TMM8, the APEC Tourism Working Group held a tourism workshop yesterday morning. During the event, delegates from APEC economies discussed topics relating to integrated development of tourism and other industries; the use of technology for smart tourism; and connectivity issues.
The 45th APEC Tourism Working Group Meeting (TWG45) will be held today and tomorrow. As host country, China will brief delegates on its preparations for the TMM8, and exchange views with the attendees on issues of common concern.
The MSAR government will host the “Macao Night”, a welcome dinner for international delegates, on September 12.
TMM8 will officially open at the Macao East Asian Games Dome on the morning of September 13 (Saturday), with the press conference for meeting achievements being held in the same afternoon.
With the theme “Exploration of Asia Pacific Tourism Cooperation and Future Development”, the five main topics for discussion during the meeting are related to exchanges between and discussions concerning integration of Asia Pacific tourism markets, facilitating transformation and growth of the tourism industry, promoting intelligent tourism with modern technology and interconnection of Asia Pacific travel, and encouraging low-carbon development and co-operation between tourism operators.
The ministerial meeting will conclude with the announcement of the “Macau Declaration”, the event’s key achievement.