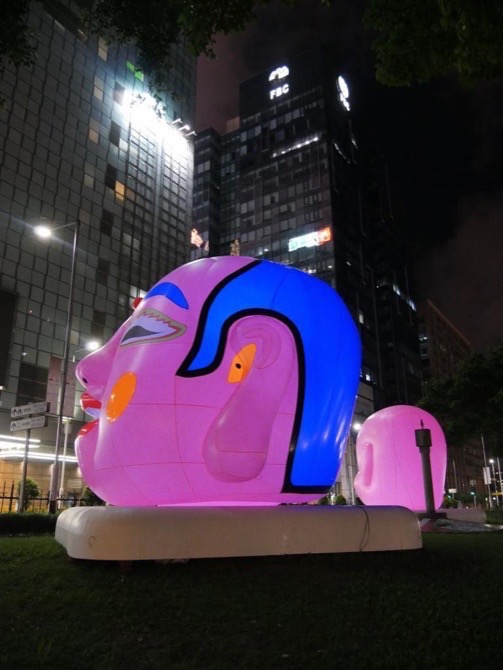 The two big heads on show at the Jorge Álvares Garden, as part of the Macao Art Festival, have provoked mixed reactions from the public. But the creators behind the piece say that’s a good thing: art is meant to provoke.

Local Chinese-language media All About Macau reported that it had received comments from readers, expressing doubts whether the Municipal Affairs Bureau had made light decorations for the Chinese Ghost Festival.

Later, it was clarified that those heads are part of the Art Macao festival that is being held for the first time this year.

The two heads figurines, collectively known as “The Happy Heads”, have toured with their creators to many places, such as Norway, France and Beijing.

Their creators, Brussels-
based artist duo Benoit+Bo, or their official Chinese name “Eastern Bo and Western Bo”, embody ‘East meets West’ in terms of ethnicity. The “Eastern Bo” is originally from China, but moved to Europe; while the “Western Bo” is from Europe, but spent some time in China, where he met the Eastern partner.

The Times raised the controversy concerning The Happy Heads in an interview with the duo yesterday.

The artists were initially surprised upon hearing that members of the public had been frightened, because they “saw many people taking pictures and selfies in front of the art piece.”

“I think they’re not scared,” answered Bo. “It’s [only] unusual to see such a large-scale contemporary art piece in a public space.”

Benoit added that it is good to have feelings about an art piece, “it is not a décor [decoration]. They have a feeling, a reaction, which is very good. It’s art, and art pushes people to react and to think.”

Besides the two heads, the duo has another exhibition at the Old Court. There are two sections: one is a showcase of computerized alterations to Chinese New Year red banners, and the other of pictures taken in various cities.

The exhibition will open at the Old Court Building tomorrow, and remains until September 15. It is part of the collaboration between Macau and the Consulate General of Belgium in Hong Kong, and is sponsored in Macau by Melco Resorts and Entertainment. Staff reporter