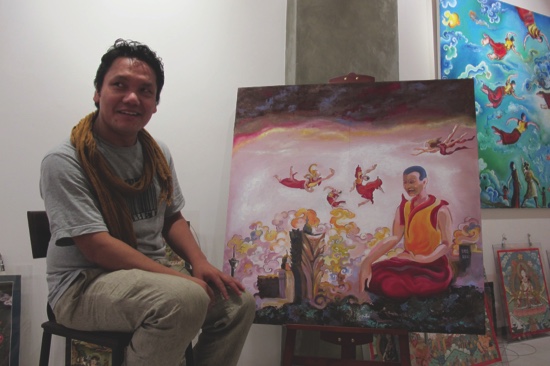 A Himalayan-themed art exhibition will open tomorrow night to coincide with the formal re-opening of the iAOHiN Gallery, following its three-month refurbishment. The exhibition, titled “Tibet Revealed: an in depth look at art from the roof of the world,” will exhibit contemporary and traditional Tibetan art, including Tibetan Buddhist art and works by current ‘Tibetans-in-exile’.
Exhibition curator Simon Lam says, “Through more than 20 contemporary paintings and 30 thangka [Tibetan Buddhist paintings on cotton or silk] we will present to visitors how Tibetan culture and religion are preserved both at home and in exile […] and how Tibetan history is seen through a Tibetan perspective.”
Among the exhibiting artists is Amsterdam-based Tashi Norbu, whose contemporary art contrasts the traditional and the materialistic “mainstream” with iconic Tibetan-style clouds and natural scenery.
“It is a contradiction of sorts,” he tells the Times in an interview, “between traditional Tibetan Buddhism and materialism.”
“One is being threatened by the other, but they must [ultimately] belong together. In this world we can’t stop [them from intermingling],” he explained.
One such painting depicts a Tibetan Buddhist monk alongside the superhero character Spider-
Man, both encircled by traditional clouds. This symbolizes a lack of clarity, according to Tashi Norbu.
“We [Tibetans] are very proud of our heritage […] and the influence we have had on the rest of the world, especially since the 1960s,” he said. “Today we have the potential to contribute greatly to the world in terms of our [unique] philosophy.”
Norbu arrived in Macau about 15 hours before speaking with the Times, and surprised gallery director Florence Lam with a brand new, unfinished painting, depicting the city of Macau in his recognizable style.
Norbu will work on the painting, which features the Grand Lisboa and the Macau Tower, and may finish it during tomorrow’s opening.
In contrast to Norbu’s contemporary fusion stands Li Ben Ta Shi, a thangka master from a place in Tibet that is known as “Art City,” he tells the Times through a translator.
He stresses the religious influence on his works, some of which contain liquefied gold, and all of which are composed of thousands of intricate details.
“Thangka is about a story of the Buddha,” he says. “The works tell a story, and one painting can recount the whole life of a person through its many dimensions.”
Li Ben Ta Shi explains that his broader motivation is to encourage more people to take up the traditional art form in a bid to preserve the culture.
“Much of my art is about themes of redemption. [It is about] encouraging us to commit few sins, to be a good person and to do something good for society,” he explains to the Times.
By far the most controversial of the works on display is a painting in the “Tibet Revealed” collection by Australian-based Tibetan exile Karma Phuntsok, who was born in Lhasa in 1952.
The painting in question appears to depict the Chinese military’s crackdown during the Lhasa Uprising in 1959, though the artist, who is not able to attend the exhibition, was unable to confirm this.
Chinese soldiers are portrayed with blood dripping off their ends of their rifles and staining the ground beneath them as they march through the Tibetan capital.
“We are really testing the boundaries with this one,” said Simon Lam. “Some of these works are basically forbidden to be shown in the mainland.”
“Artists should have the freedom to express what they want to say,” Florence Lam told the Times in relation to the controversial painting. “Works [like these] can’t be created when one has to think about censorship or rules.”
In response to repeated questioning from the Times, Florence Lam said, “This could be the most controversial piece [in the exhibition] … but I still don’t see anything wrong with it.”
Some of the paintings
will be moved to the gallery’s warehouse near Red Market which, according to Simon Lam, is “probably the biggest in Macau for such activities, at 1200 square meters.” They will be displayed there for up to two months. Daniel Beitler 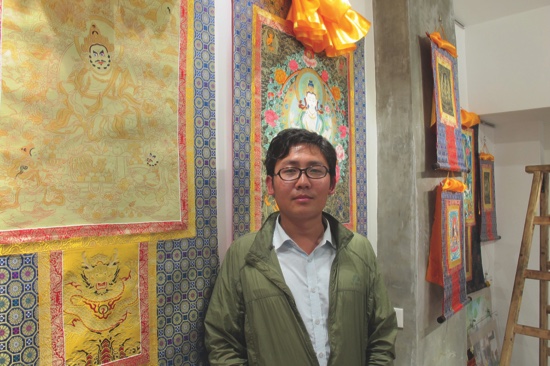