Arts | Musical is a search for identity, say performers in Mr Shi and His Lover 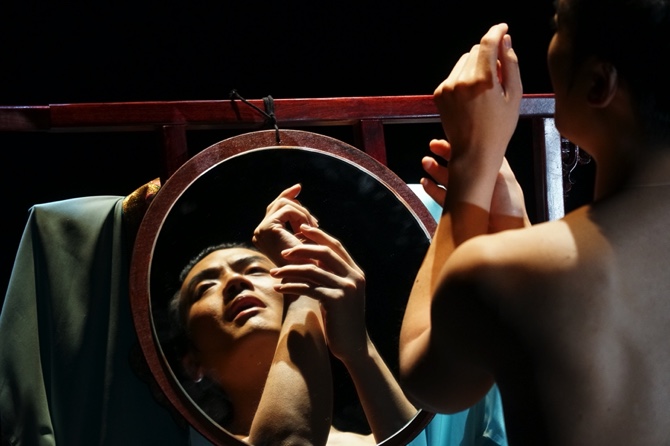 Each and every performance rendered by the actor portraying Mr Shi in the musical “Mr Shi and His Lover”, now playing at the Macau Cultural Center, is a chance to better understand his unique character.

After touring around the world, the blockbuster musical has arrived in Macau for four shows, the first of which was held last night. Two actors and the director met the press yesterday to talk about the musical.

The production tells the real- life story of Shi Pei Pu, a Chinese opera singer, and Bernard Boursicot, a French diplomat, who became romantically involved while the latter held a diplomatic post in China. Early on in their relationship, Shi announced she was pregnant and that Boursicot had fathered the child.

In the 1980s, the diplomat was accused of passing classified information to the Chinese through Shi, and the two were arrested by the French government on charges of espionage. The trial that followed produced international headlines for this singular twist: during the proceedings, it was revealed that Shi was a man and Boursicot believed Shi was a woman throughout their 20-year relationship.

Jordan Cheng, the actor portraying the character of Mr Shi, said yesterday that every performance helps him to better understand his character.

Cheng also said he was very grateful for the chance to perform in this production. “This role somehow helps me to think and to rethink… It actually helped me to become a better artist in a way that I’d never imagined before,” said Cheng, “because it has forced me to ask questions [about it and my art].”

Derek Kwan, the actor portraying Boursicot, felt tightly connected with the production. “Sometimes we do a show, we walk onto the stage, we play, we walk off, and it’s done,” Kwan said. However, for this musical, the case was different.

“It taught me a lot about presence and commitments, which I think is also discussed in the show,” he said. “Why do we exist? For ourselves? For others?”

“I have always wanted to do a musical drama,” said director Tam Chi Chun, adding that his friend, Njo Kong Kie, also the music director of the show, also possessed that desire. “What interested me the most, in the first place, was how music can present the process of the thinking of a person. Or, is there a way to transform the process into music?”

Tam stressed that he has never seen this musical as a gender-oriented production. It is more about human factors.

As for the audience, attendees should expect an in-depth conversation, not only with the stage but also inside themselves.

The musical is a contemporary, minimalist show inspired by Chinese opera and both Eastern and Western vintage pop. The sold-out musical has won awards for Best New Musical, Best Actor and Supporting Actor in a Musical at the Toronto Theatre Critic Awards in 2018. AL