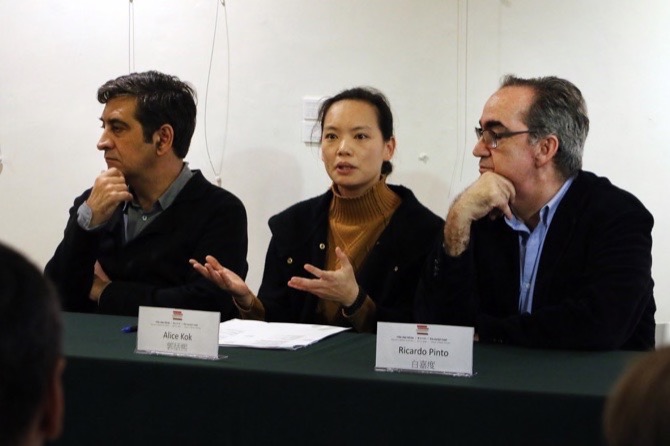 For the first time, The Script Road – Macau Literary Festival has chosen a central theme for this year’s program – poetry – which kicks off this week. The organizers revealed the theme during yesterday’s press conference and program launch. In its eighth year and under new leadership, the festival will run over ten days.

During the press conference at the Livraria Portuguesa, Program Director Carlos Morais José noted that this is the first time the festival has been run under a central theme. “Now that we have a theme we decided to start by poetry,” he said, remarking on how poetry can work itself as a universal language, followed and used by everyday people independent of whichever communication code or language they use.

“Every person, even every small ‘tribe’, has its own poetry,” he said, recalling that poetry is also a significant part of both Chinese and Portuguese culture, as well as in Portuguese-speaking countries. “Through poetry, we can create bridges. And not just any bridges, beautiful bridges.”

During the event, poets from Portuguese-speaking countries, Macau and China will talk about their work, and provide perspectives on the current state of poetry production and the role of the art form in the contemporary world.

A special programme on Adé has been prepared, to highlight the work of a man who did not let Macau’s original dialect Patuá die and brought it to life in many forms, such as theatrical performances which persist today and have gained momentum in the last few years thanks to the group Dóci Papiaçám di Macau, which is also celebrating its 25th anniversary.

“I would like to underline this event [held in collaboration with Dóci Papiaçám di Macau] which allows a very rare opportunity [for the public] to listen to poetry recited in the Patuá dialect,” said Morais José.

Previously, the director of the festival, Ricardo Pinto, had announced that among several book launches planned for this year was also a Macanese Patuá dictionary.

Another of this year’s festival novelties is the use of different venues, namely Navy Yards 1 and 2 and the Wing Lok (Alegria) Cinema, among others.

Aside from several exhibitions and other events, the Navy Yards will be the stage for Macau-based theatre group “Rolling Puppets,” who will present their puppet-theatre show “Drug,” a renewed adaptation of Lu Xun’s 1919 novel of the same name. The show will be performed over the last three days of the festival.

Another highlight is “Maritime Ode” by Pedro Lamares, a long poem that will be entirely recited during the festival.

The long poem is considered central to the work of Álvaro de Campos, one of the poet Fernando Pessoa’s various heteronyms, and is seen as a masterpiece of Portuguese poetry.

Moreover, a series of events will run on March 21 in celebration of World Poetry Day, with organizer Alice Kok saying the event will include multilingual activities such as poetry recital, music and dancing in the relaxed environment of Tak Chun Macau Art Garden.

Music will once again be part of the festival, featuring Salvador Sobral, Portugal’s 2017 Eurovision Singing Contest winner, who on his first visit to Macau will perform at The Broadway Theatre, on March 17 from 9 p.m.
Taiwanese band Wednesday & Bad to the Bone will close the festival, playing at the closing party at Live Music Association on March 24 from 10:30 p.m.