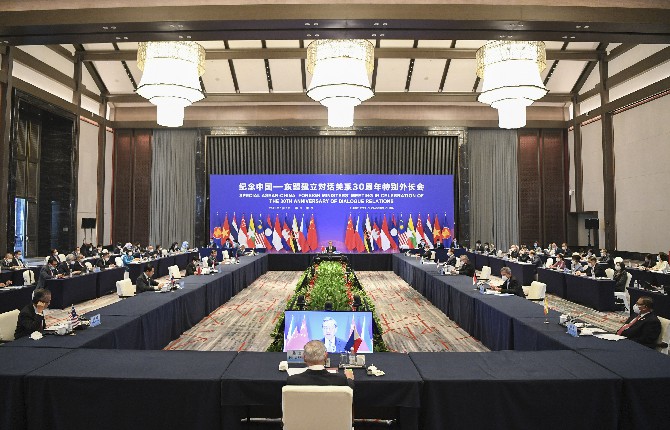 China yesterday pledged further assistance to Southeast Asian nations in battling the coronavirus pandemic as it seeks to boost influence with the region where the United States is also looking to strengthen ties.
Chinese Foreign Minister Wang Yi told his counterparts from the 10-member Association of Southeast Asian Nations that China had already delivered 100 million vaccine doses to ASEAN nations along with other pandemic-fighting materials and technical help.
Wang likened the challenge to earlier economic crises, the 2003 SARS outbreak and the 2004 Indian Ocean tsunami, saying all were faced with “practical action arising from feelings of brotherly concern and the care of watchful neighbors.”
“In the process of jointly overcoming challenges, we have deepened friendship, mutual trust and common interests,” Wang told the ministers, assembled in the southwestern Chinese megacity of Chongqing for meetings marking the 30th anniversary of formal relations between China and ASEAN.
Beijing has been building influence with ASEAN, despite frictions with some members of the bloc over competing territorial claims in the South China Sea. China’s construction of islands and its military operations in the sea have brought complaints Beijing is militarizing the waterway.
China’s economic and diplomatic heft has helped override such concerns, however, while the bloc has been unable to form a unified stand in the face of opposition from Chinese allies within it, primarily Cambodia.
Wang said yesterday that the sides should explore establishing an expert panel to strengthen cooperation throughout the vaccine process, from research to use, and work to build production and distribution centers to help make vaccines affordable and accessible in the region.
He said China would “urgently implement” the China-ASEAN Public Health Cooperation Initiative, continue to support the ASEAN Emergency Medical Materials Reserve and strengthen regional public health capacity-building.
“China will work with ASEAN to overcome the outbreak as soon as possible,” Wang said.
Though COVID-19 was first detected in China in late 2019, the nation has largely stamped out domestic transmission, although it has been accused of insufficient transparency or even seeking to conceal the origins of the pandemic.
Wang made no direct reference to Myanmar, an ASEAN member where the military seized power Feb. 1 and has cracked down on widespread opposition to the coup. He said China supported ASEAN’s non-interventionist approach.
China has also been criticized for building dams upstream on the Mekong River, affecting water levels and fisheries downstream on a waterway that is crucial to the economies of several Southeast Asian nations.
Foreign Ministry Zhao Lijian defended China’s policies on management of the river, known as the Lancang in China. Beijing attached “great importance to the concerns of downstream countries,” had released water to help countries dealing with drought and was willing to work with them on how best to promote sustainable use of water resources, Zhao told reporters at a later briefing.
“There are numerous hydraulic and hydropower facilities in various countries along the river. Its water volume is affected by multiple factors,” Zhao said. MDT/AP