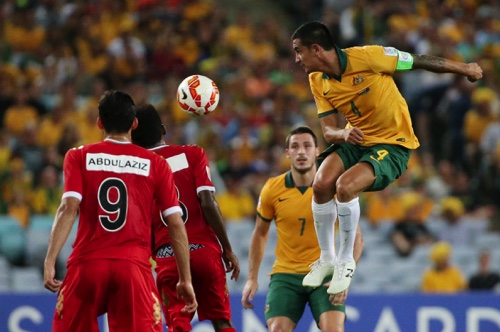 Now that Australia and South Korea have secured their spots in the Asian Cup quarterfinals, attention has quickly turned to which of the continental heavyweights will top the group.
Australia’s 4-0 demolition of Oman in Sydney ensured both the Socceroos and South Korea advanced — both teams have six points from two games. They’ll meet in Brisbane on Saturday to determine rankings in Group A.
Australia already is well ahead on goal differentials with eight already. South Korea has won both its games 1-0, beating Oman on the weekend and Kuwait in Canberra on Wednesday, albeit with a much weakened lineup.
The South Koreans finished third in 2011 Asian Cup, when Australia lost the final to Japan.
South Korea coach Uli Stielike was clearly unimpressed with his stuttering attacking lineup. Nam Tae-hee scored the only goal in the 36th minute against Kuwait, which was coming off a 4-1 loss to Australia in the tournament opener.
“With football like this, you cannot win the tournament,” Stielike said. “With a performance like today, you cannot go far in this tournament.”
The Australians, meanwhile, are playing the kind of football that coach Ange Postecoglou has been promoting since he took charge in the leadup to the World Cup.
Matt McKay and Robbie Kruse scored goals and Mark Milligan converted from the spot to make it 3-0 at half time. Tomi Juric added a fourth after the break.
“I’m really pleased, I think the players were really fantastic tonight,” Postecoglou said. “They worked really, really hard and the quality of our football was really outstanding from the first minute.
“Against a tough opponent, I thought we got command pretty early.”
Oman had proved to be a troublesome opponent for Australia since their first meeting at the 2007 Asian Cup — where only an injury-time equalizer by Tim Cahill salvaged a point for the Socceroos. The Oman lineup started brightly again, with Raed Saleh’s fierce volley from 25 yards acrobatically saved by Mat Ryan after three minutes.
Australia made the first breakthrough, though, when Massimo Luongo’s corner kick was headed toward goal by defender Trent Sainsbury, and Matt McKay bundled the ball past goalkeeper Ali Al Habsi in the 27th minute. Kruse added another three minutes later and it was virtually all over after Milligan took his penalty just before the break, to the delight of the 50,276-strong crowd.
“They were better than us,” Oman coach Paul Le Guen said. “For the first 30 minutes before the opening goal it was quite ok, because we created some, but obviously it was not enough.”
“Really they have a good balanced team. They have power, they have impact and that’s why they are favourites of the competition.”
Oman and Kuwait, already out of contention, meet in Newcastle on the weekend in their last group game.
Australia rested injured captain Mile Jedinak, and withdrew Tim Cahill after 51 minutes to save his legs for later in the tournament.
South Korea had to overcome the loss of star winger Lee Chung-yong, who was ruled out with a fractured shin in the hours before kickoff. The South Koreans made seven changes from the lineup that opened the tournament.
Lee was injured in the win over Oman last weekend. It is unlikely he will participate in the rest of the tournament, which finishes with the final on Jan. 31.
Right-back Kim Chang-soo has also failed to recover from his injury, while attacker Son Heung-min, midfielder Koo Ja-cheol and goalkeeper Kim Jin-hyun were all kept off the team due to sickness.
Two teams are playing to avoid elimination in the second set of matches in Group B on Wednesday, with North Korea playing three-time champion Saudi Arabia in Melbourne.
China and 2011 semifinalist Uzbekistan, on three points each, will meet in Brisbane. AP