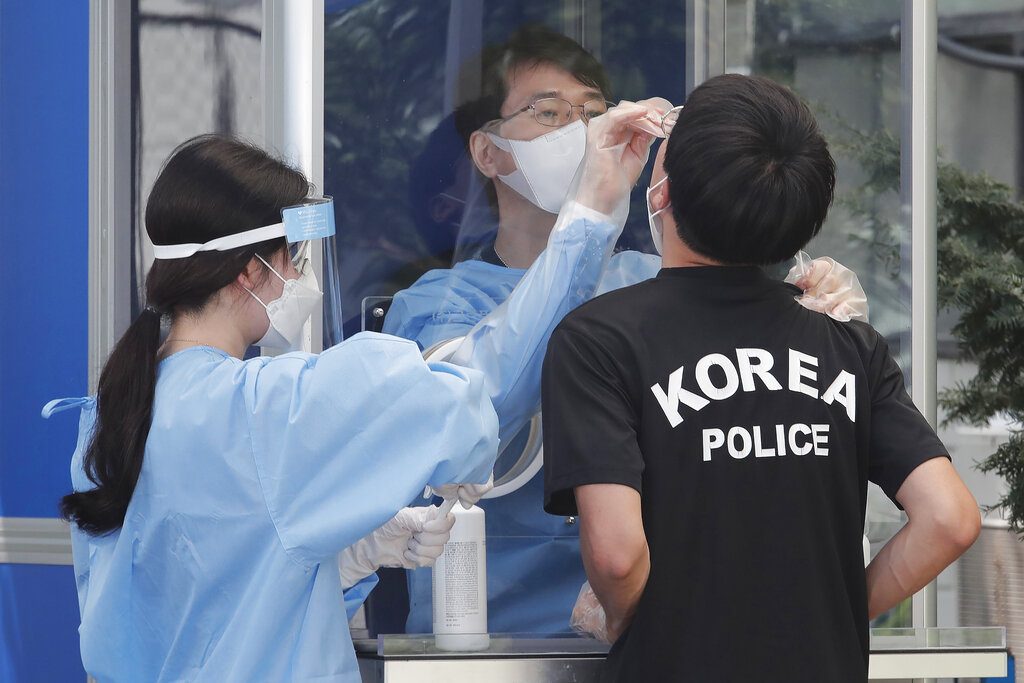 South Korean health workers have found more than 600 coronavirus infections linked to a Seoul church led by a vocal opponent of the country’s president as officials began restricting gatherings in the greater capital area amid fears that transmissions are getting out of control.
Vice Health Minister Kim Gang-lip said today (Wednesday) that health authorities are also seeking location data provided by cellphone carriers while trying to track thousands who participated in an anti-government protest on Saturday, which worsened the virus’s spread. The march was attended by members of the Sarang Jeil Church and its ultra-right pastor, Jun Kwang-hun, who has been hospitalized since Monday after testing positive.
Kwon Jun-wook, director of South Korea’s National Health Institute, said 623 cases have been linked to church members after the completion of some 3,000 tests. Police are pursuing around 600 church members who remain out of contact.
Transmissions from the church have already spread through various places through the activities of members, including call centers, nursery homes and other churches.
The country on Wednesday reported 297 new cases of the virus, its biggest daily rise since March 8.
It was the sixth straight day the country reported daily increases in triple digits, with most of the cases coming from the densely populated Seoul metropolitan area.
The main building of Seoul City Hall was shut down for disinfection Wednesday afternoon after an employee tested positive.
Officials have enforced stronger social distancing restrictions for Seoul and nearby Gyeonggi province and the city of Incheon, prohibiting gatherings of more than 50 people indoors and 100 people outdoors.
Nightclubs, karaoke rooms, buffet restaurants, computer gaming cafes and other “high-risk” facilities will be shut, while churches will be required to conduct services online.
In other developments in the Asia-Pacific region:
— India reported 1,092 new fatalities from COVID-19 on Wednesday, its highest single-day total. The country has the fourth-most deaths in the world and the third-most cases, with over 2.7 million — including more than 64,000 new infections reported Wednesday. The actual numbers, like elsewhere in the world, are thought to be far higher due to limited testing. Four of India’s 28 states now account for 63% of total fatalities and 54.6% of the caseload. The western state of Maharashtra and the southern states of Tamil Nadu, Andhra Pradesh and Karnataka are the country’s worst-hit regions.
— Authorities imposed a one-week lockdown in Nepal’s capital and surrounding districts Wednesday after a surge in coronavirus cases. People are prohibited from leaving their homes, offices and businesses are closed and traffic halted except for essential and emergency movement. All outdoor religious activities and ceremonies are also not allowed. Violators face one month in jail and a fine of 500 rupees ($4). Nepal’s 1,016 cases recorded Tuesday was its highest daily spike. Kathmandu had 205 of the new cases. A national lockdown imposed in March lasted for 120 days before being lifted last month. The country has confirmed 28,257 cases and 114 deaths from the coronavirus.
— Australia has a deal to manufacture and distribute a potential coronavirus vaccine being developed by British-Swedish pharmaceutical company AstraZeneca. “Under the deal, every single Australian will be able to receive the University of Oxford COVID-19 vaccine for free, should trials prove successful, safe and effective,” Prime Minister Scott Morrison said in a statement. “If this vaccine proves successful, we will manufacture and supply vaccines straight away under our own steam and make it free for 25 million Australians,” he said. The deal came as Australia’s hard-hit Victoria state announced its lowest number of new coronavirus cases in more than five weeks. The Victoria state Health Department said Wednesday that 216 new virus cases and 12 deaths were reported in the latest 24-hour period.
— New Zealand appeared to be gaining control over a coronavirus outbreak in Auckland after just five new community infections were reported Wednesday. A sixth infection was found in a quarantined traveler who had returned from Qatar. Prime Minister Jacinda Ardern said 500 more military personnel would be deployed to quarantine hotels as the nation looks to reduce the number of private security guards it employs and tighten its border controls. Meanwhile, in a case that has been closely followed by law students but will likely have few real consequences, a New Zealand court has found that the government overstepped its legal authority in the early stages of a seven-week coronavirus lockdown by ordering people to stay home, but then remedied that nine days later by issuing a more explicit health order. The High Court in Wellington concluded that the government did have the authority to order a full lockdown, but at first didn’t use the right legal mechanisms.
— Japan’s exports in July plunged 19.2% from a year ago, as the coronavirus pandemic continued to slam the world’s third largest economy, government data showed Wednesday. The Finance Ministry’s provisional numbers showed Japan’s imports fell 22.3% in July. Exports to the U.S. especially suffered, declining 19.5% last month, as exports fell in plastic goods, iron and steel and computer parts. But Japan recorded its first trade surplus in four months on the back of a recovery in China.