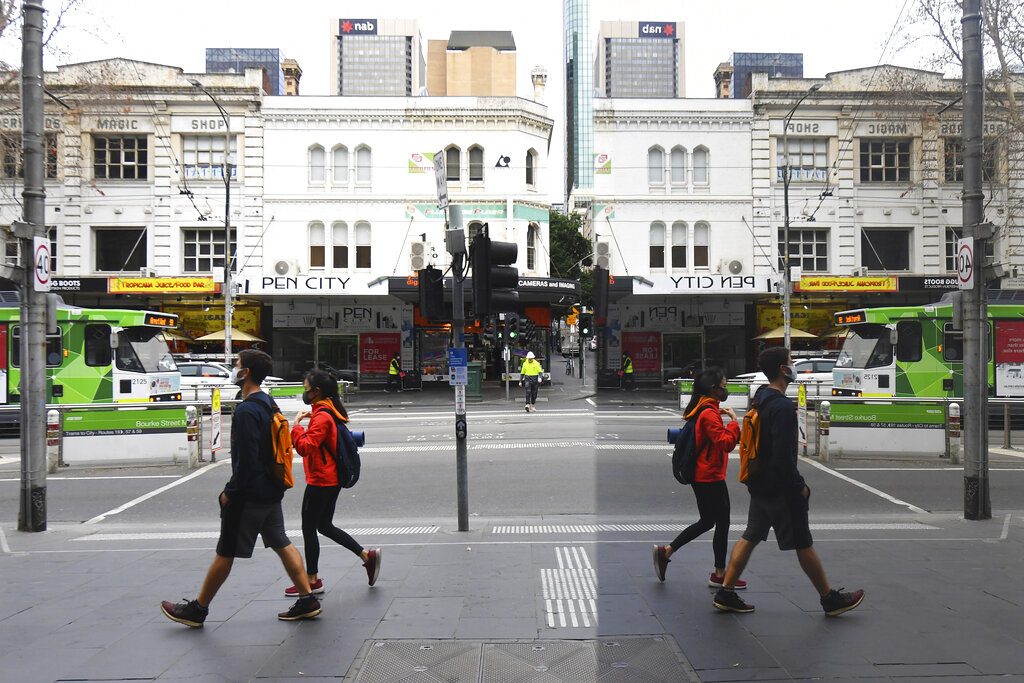 People wearing face masks to help protect against the spread of the new coronavirus walk in the central business district in Melbourne, Australia, Wednesday (James Ross/AAP Image via AP)

MELBOURNE — Australia’s hard-hit Victoria state reported a record 484 new COVID-19 cases on Wednesday and health authorities warned that numbers could continue to rise.
With Australia’s second-largest city, Melbourne, now in lockdown for two weeks, authorities had hoped the infection rate would begin to plateau.
“Certainly we’re at a really, really challenging phase of this pandemic,” Chief Health Officer Brett Sutton said.
“We can’t necessarily expect numbers to go down. I think that will be an even greater challenge in days ahead. That means that we’re going to look at 500-600 cases per day. I absolutely don’t want us to go there,” Sutton added.
Victoria Premier Daniel Andrews said people had to self-isolate when they become sick.
He said nine out of 10 people did not self-isolate between having symptoms and being tested. More than half did not self-isolate between when they were tested and when they got the results.
Andrews also announced two more deaths, both men in their 90s, bringing the national death toll to 128.
Face masks will become compulsory from Thursday for residents in lockdown regions when they leave their homes.
Six prisons in Victoria were placed into total lockdown on Tuesday after a staff member tested positive at one of the crowded facilities.
Australian Deputy Chief Medical Officer Michael Kidd said the nation’s tally of 502 new COVID-19 cases on Wednesday was its largest ever. The fact that Australia recorded only two new cases on June 9 demonstrated how quickly outbreaks can spread, he said.
All but 18 of the new cases were in Victoria state. Neighboring New South Wales reported 16 new cases.
In other developments in the Asia-Pacific region:
— Just days after South Korean officials hopefully declared the country’s COVID-19 epidemic was coming under control, health authorities reported 63 new cases. South Korea’s Centers for Disease Control and Prevention on Wednesday said at least 36 came from the Seoul area. The KCDC didn’t immediately confirm whether the numbers included a cluster at a front-line army unit in Pocheon, where at least 13 troops have reportedly tested positive. The KCDC said 34 cases were tied to international arrivals. The country had reported four local transmissions on Monday, the lowest in two months, prompting a celebratory tweet from President Moon Jae-in.
— Nepal’s government on Wednesday ended its lockdown 120 days after it was imposed to control the spread of the coronavirus. Information Minister Yuba Raj Khatiwada said the number of cases were declining. Government and private offices would be fully functional from Wednesday, all vehicles would be allowed on the streets and markets, malls and shops will be allowed to open. Airports and commercial flights will resume Aug. 1. Khatiwada said schools and colleges would remain closed until further notice. Large public gatherings and religious functions and parties remain prohibited, and gymnasium, zoo and parks remain closed. The lockdown imposed in March was renewed several times before the government eased it last month. The country has 17,994 confirmed cases and 40 deaths from coronavirus.
— Hong Kong is requiring masks on public transport, in public indoor areas and at transport terminals as it battles a renewed virus outbreak. The mask mandate will last until Aug. 5 as the city strives to break local transmission of the virus. It reported a record 113 new infections on Wednesday, of which 105 were locally transmitted. Authorities were unable to trace the source of 63 cases. Hong Kong now has a total of 2,132 confirmed infections, including 14 deaths. The city is at a “high risk of outbreak in community” of the coronavirus, with health minister Sophia Chan appealing to people to stay at home as much as possible.
— Faced with labor shortage in construction and agriculture, Thailand has agreed to let in about 120,000 migrant workers from Myanmar, Cambodia and Laos in the next phase of easing coronavirus restrictions. A spokesman for the government’s COVID-19 center says details such as quarantine measures still have to be worked out. A further loosening of restrictions, which also includes opening the borders to foreigners visiting for medical and business purposes, is expected Aug. 1. Thailand’s government will extend until the end of August a state of emergency imposed in March to help contain the spread of the coronavirus, though critics want it abolished because they charge it is used to suppress political dissent. An anti-government demonstration Saturday in Bangkok drew over 2,000 people.
— Numbers of cases in China’s latest virus outbreak continued to fall Wednesday, with nine new cases in the northwestern region of Xinjiang. All were reported in the regional capital Urumqi, which has locked down some communities, restricted travel and carried out extensive testing. Another five new cases were reported among Chinese arriving from abroad, bringing China’s total to 83,707 with 4,634 deaths since the coronavirus pandemic began.
— A new study indicates far more people have been infected with the coronavirus in India’s capital region than official figures show. The National Center for Disease Control says it tested more than 21,000 people selected randomly across Delhi, the state that includes New Delhi. It found an estimated 22% of the state population has been infected, or more than 6.6 million people. Delhi has officially reported just 123,000 infections, meaning that most cases have not been tested or identified. Testing is even more limited in many places outside the capital area.
— The U.S. Justice Department says hackers working with the Chinese government targeted firms developing coronavirus vaccines and stole hundreds of millions of dollars worth of intellectual property and trade secrets from companies worldwide. The indictment says the hackers researched vulnerabilities in the computer networks of Massachusetts and Maryland companies known for their work in developing vaccines and treatments. The case was filed this month in Washington state and unsealed Tuesday. The indictment includes charges of trade secret theft and wire fraud conspiracy against the hackers, who prosecutors say stole information of interest to the Chinese government.