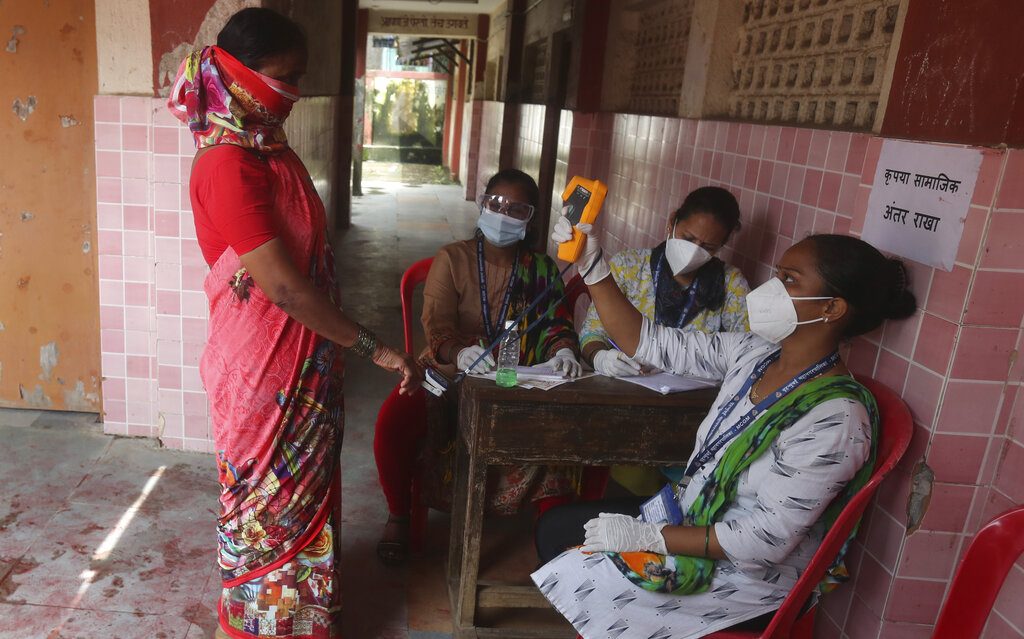 Community health workers screen people for COVID-19 and malaria symptoms in a school in Dharavi, one of Asia’s biggest slums, in Mumbai (AP Photo/Rafiq Maqbool)

India counted another record high of new coronavirus infections today (Thursday) as it ramped up testing to more than 900,000 a day.
The 69,652 new cases pushed India’s total past 2.8 million, of which 2 million have recovered, the Health Ministry said.
The country also recorded 977 coronavirus fatalities in the past 24 hours, raising total deaths to 53,866, the ministry said.
COVID-19 illnesses and deaths are thought to be far higher around the world due to limited testing and other factors.
India has conducted 3 million tests for the virus, but experts have urged increasing its testing capacity greatly, given India has the world’s second-highest population of 1.4 billion people.
It has the third-most cases in the world, behind the United States and Brazil, and has the fourth highest number of deaths behind the U.S., Brazil and Mexico.
India’s nationwide lockdown imposed in late March began easing in May and is now largely being enforced in high-risk areas.
On Wednesday, authorities ordered reopening of hotels and weekly markets in the Indian capital that were closed for nearly four months. The situation improved in the Indian capital with only 12 deaths reported in the past 24 hours.
Delhi has about 11,000 active cases after more than 139,000 people were infected.
Four of India’s 28 states now account for 63% of total fatalities and 54.6% of the caseload. Western Maharashtra state and three southern states of Tamil Nadu, Andhra Pradesh and Karnataka are the worst-hit regions.
In other developments in the Asia-Pacific region:
— South Korea reported 288 new cases, its third straight day over 200, as health authorities scramble to slow an outbreak in the greater capital area. The Korea Centers for Disease Control and Prevention said 230 of the new cases came from the Seoul metropolitan region, where health workers have struggled to track transmissions tied to various places and groups, including churches. As of noon Thursday, 676 cases have been linked to a huge northern Seoul church led by a vocal conservative activist. Sarang Jeil Church’s pastor, Jun Kwang-hun, marched in downtown Seoul over the weekend, shared a microphone with other protesters and was later hospitalized after testing positive. At least 17 other protesters have tested positive so far. Separately, the Education Ministry said 240 infections have been confirmed among students and teachers since the country reopened elementary, middle- and high-schools in May.
— Australian lawmakers for the first time can attend Parliament remotely due to new rules introduced in response to the coronavirus pandemic. Australia’s Parliament resumes in Canberra beginning Monday for two weeks. Lawmakers can participate in debates and ask questions by video with the House Speaker’s approval, but they will not be able to vote on legislation, second motions or move amendments to legislation. Some lawmakers are spending two weeks in hotel quarantine ahead of Parliament resuming.
— Health officials in Australia’s hot spot state said the daily new COVID-19 tally would have to be substantially lower before authorities would consider easing the lockdown in the city Melbourne. “I won’t give you a figure, but single digits or even low double digits,” Victoria state Deputy Chief Health Officer Allen Cheng said, though he was encouraged by a downward trend. Victoria Premier Daniel Andrews said if the city was reopened even at half the current figures, “you wouldn’t have defeated the second wave. You’d just be beginning the process of a third wave.” Victoria reported 240 new cases and 13 deaths Thursday, an increase from the previous day but continuing a recent decline. Melbourne has been under Australia’s toughest pandemic lockdown restrictions for two weeks.