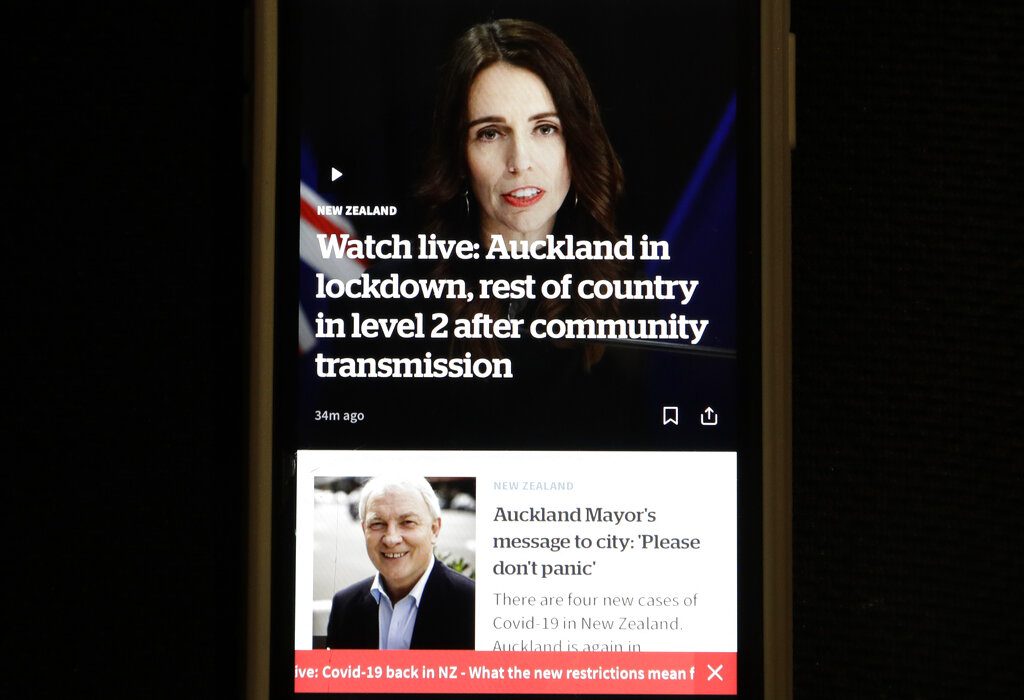 New Zealand Prime Minister Jacinda Ardern said Tuesday that authorities have found four cases of the coronavirus in one Auckland household from an unknown source, the first reported cases of local transmission in the country in 102 days.
Ardern said Auckland, the nation’s largest city, will be moved to Alert Level 3 from midday Wednesday through midnight Friday, meaning that people will be asked to stay at home, while bars and many other businesses will be closed.
“These three days will give us time to assess the situation, gather information, make sure we have widespread contact tracing so we can find out more about how this case arose and make decisions about how to respond to it once we have further information,” Ardern said at a hastily called news conference late Tuesday.
“I know that this information will be very difficult to receive,” Ardern said. “We had all hoped not to find ourselves in this position again. But we had also prepared for it. And as a team, we have also been here before.”
She said that traveling into Auckland will be banned unless people live there and are traveling home.
She said the rest of the country will be raised to Level 2 through Friday, meaning that mass gatherings will be limited to 100 attendees and people would need to socially distance themselves from each other.
In other developments in the Asia-Pacific region:
— An outbreak in Australia’s second-largest city held steady Tuesday, raising hopes the strict lockdown in Melbourne was working. Victoria state, which includes Melbourne, reported 331 new cases and 19 more deaths from COVID-19, equaling the record number of deaths set a day earlier. The number of new infections was less than half the peak days in recent weeks. Meanwhile, health authorities in Sydney were investigating a growing cluster of cases centered around a private Catholic school. The state of New South Wales, which includes Sydney, reported 22 new cases, including eight that are linked to the school cluster.
— Mainland China and semi-autonomous Hong Kong saw declines in their recent outbreaks Tuesday. The number of new community infections in China fell to 13, all in the northwestern region of Xinjiang. Hong Kong counted 69 new cases. The mainland also saw 31 new cases brought by Chinese travelers from abroad. China requires testing and a two-week quarantine of all new arrivals and has barred most foreigners from entering the country. The National Health Commission said 794 people are in treatment for COVID-19, while another 288 are being monitored in isolation for showing signs of the illness or testing positive for the virus without displaying symptoms.
— Taiwan’s foreign minister says his government sent protective gear and other COVID-19 assistance to foreign countries surreptitiously so the recipients wouldn’t face China’s wrath. China has sought to diplomatically isolate the island it claims as its own territory, and Joseph Wu described Taiwan’s efforts to help while facing that pressure as “increasingly difficult.” Wu was meeting with U.S. Health and Human Services Secretary Alex Azar, the highest-level American to visit Taiwan in four decades. China’s efforts include excluding Taiwan from global health forums, but Azar said the U.S. supports Taiwanese participation. Azar said, “Especially during a pandemic, but at all times, international organizations should not be places to play politics.”
— U.S. Health and Human Services Secretary Alex Azar says it’s more important to have a safe and effective vaccine against the coronavirus than to be the first to produce a vaccine. Azar, on a visit to Taiwan, was asked by ABC on Tuesday what he thought of Russia’s announcement that it had become the first country to register a vaccine against the virus. He replied: “The point is not to be first with a vaccine. The point is to have a vaccine that is safe and effective for the American people and the people of the world.” He said it’s important to have transparent data on the vaccine to prove its safety and efficacy, and noted that the U.S. has six vaccines in development under the Operation Warp Speed initiative. The U.S. has the highest death and case count in the world, with more than 163,000 deaths and over 5 million cases. Azar’s trip to Taiwan made him the highest-level U.S. official to visit the self-governing island since the U.S. severed formal diplomatic relations in 1979 in deference to China.
— India reported 53,601 new cases of coronavirus Tuesday as its total infections neared 2.3 million. The Health Ministry also said 871 deaths were newly reported, raising total fatalities to 45,257. India has been posting an average of around 50,000 new cases a day since mid-June. Its total infections are third in the world, behind the United States and Brazil. The three countries account for half of the world’s 20 million cases. The true numbers around the world are thought to be much higher because of factors including low testing and the possibility the virus can be spread by people who don’t have symptoms. The Indian Council of Medical Research, India’s top medical research body, said nearly 25 million samples have been tested. Health experts, however, say the country needs to test more people given its big population. A country of 1.4 billion people, India has been conducting a little less than 18,000 tests per million population.