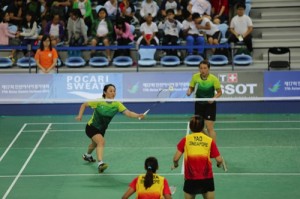 Macau badminton players Wang Rong and Zhang Zhibo have entered the final eight of the Asian Games women’s doubles.
The Macau duo first defeated Singapore yesterday and entered the final 16, where they fought South Korea and defeated their opponents in two straight sets. They will next meet the entrants from Malaysia.
Another pair of women badminton players from Macau lost to a pairing from the Chinese national team and failed to make their way into the final eight.
In the men’s badminton singles, Lou Hok Man and Iek U Ieong lost to their South Korean and Vietnamese opponents. Their teammates U Teng Iok and Wong Kit Ieng were also defeated by an Indian pair in the women’s singles.
In swimming, Chao Man Hou and Chou Kit were unable to make it to the next stage in the men’s 100 meters breaststroke. The same was the case for female swimmer Erica Vong Man Wai in the women’s 100 meters backstroke.
Macau female boxer Ng Ka Kei was set to participate in a 60-kilogram final 32 fight. However, having not yet been assigned an opponent, she entered the final 16 without a fight.
The Wushu and squash teams have finished their matches and will return to Macau today.