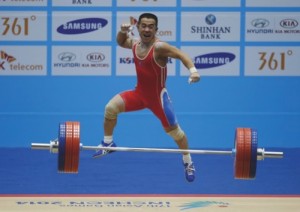 Dope testing at this year’s Asian Games has been more stringent than ever — and so far only two of the more than 9,500 athletes taking part in the regional Olympic-style event have tested positive.
No big names, no gold medals taken away, no world records stricken from the books.
But is that a good thing?
Officials administering the anti-doping regime at the games acknowledge that as hard-core dopers grow more sophisticated and better versed in how to avoid detection, in-competition doping tests at events like the Asian Games are often catching only the smallest of the small fry — athletes who may well have not even known they were breaking any rules.
“Today, more and more, we are getting athletes in the ignorant category,” said Manikasavagam Jegathesan, the chairman of the Medical Committee and Anti-Doping Commission of the Olympic Council of Asia.
He added that the two cases of banned stimulant use that have surfaced in the Asian Games are typical.
“I don’t think there was ever any intention to use these to cheat,” he said. “But we cannot make an exception to the rule simply because we are sympathetic. We have a job to do, to protect the clean athlete.”
Jegathesan said there are three kinds of athletes who fail doping tests. First are the hard-core cheats, who dope deliberately and methodically because they think it will help them to win. Next are competitors who are pushed into doping by their coaches or trainers.
Then there are athletes like Yi Sophany, an 18-year-old soft tennis player from Cambodia.
In the parlance of doping experts, she is an “innocent.”
Sophany was found to have taken sibutramine, a stimulant listed on the World Anti-Doping Association’s prohibited list. According to her team, she had no idea it would get her in trouble.
“She was just surprised. She really didn’t know,” said Nhan Sokvisal, the head of the 20-member Cambodian team at the games. “She took it as a beauty thing, to keep her weight down. It wasn’t about winning or anything. Sometimes what we eat, what we drink, we don’t know that it can cause a problem with the doping test.”
It is unlikely that the substance would have significantly benefited her on the court.
Even so, the punishment was swift.
She was disqualified, sent home in disgrace and her case kicked up to the highest levels of her sport and her national Olympic committee for deliberation and possible further action. Because the Asian Games are a high-profile international event, her positive test was reported around the world.
Jegathesan warned against judging athletes like Sophany too harshly.
“If you look at the sport, you look at the nature of the athlete and you look at the substance, I think you can make your own call and you can then give an appropriate label,” he said.
He acknowledged that finding the intentional cheats, meanwhile, is as difficult as ever.
To catch the hard-core group, doping officials at the Asian Games are deploying a test distribution system that focuses the 1,900 tests they will conduct on athletes in what are considered high risk sports or who come from countries where there are higher suspicions of doping activity.
Jegathesan said the system involves intelligence gleaned from international sports organizations and is kept highly confidential so that suspected cheaters will not know they are being scrutinized.
“There are certain sports where still believe in the axiom that if you don’t take it, you don’t make it. That’s the game,” he said.
But he added the OCA only has the authority to check for doping during the games. Eric Talmadge, Incheon, AP