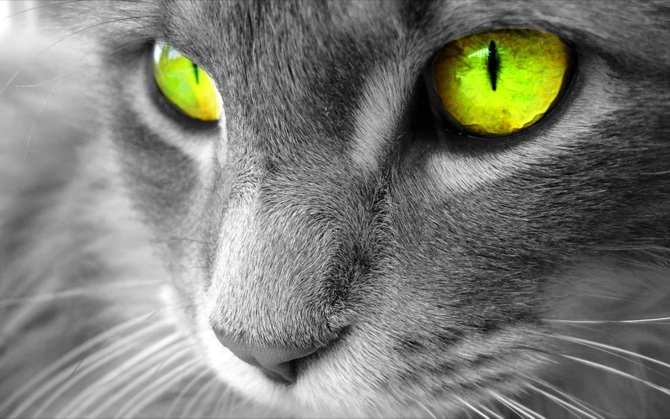 Because there is no form of two-way communications with cats, it can sometimes be difficult to determine what cats see. The only way to accurately describe the sight of cats is to actually examine the eye using modern science as a hitch. And while most cat owners would like to believe that their cat has the ability to see them clearly and in colour, the cat was simply not formed to exist in that manner.

Now that there is the advent of medical science, there is more information than ever that can tell us exactly what cats see and why they can only see a limited amount of color.

Science of the eye

The main component of the eye that is related to color is the retina. The retina is an outlet of nerves that contains both cones and rods. The cones work by taking in light and changing the images into color. That message is then sent to the brain and the concept of color is realized. Rods, on the other hand, take in light from the eye and contrast the image into black and white.

The theory of cats being able to see color is directly related to the amount of cones and rods that are present in the retina. However, modern science has recently been able to determine that cats have a much higher amount of rods in the retina than they do cones.

the Importance of the Eyes

From as far back as the history of the cat can be traced, cats have always been hunters. They lived and survived in the wilderness by hunting at night and keeping themselves concealed during the day. The eyes were a great asset because they had the ability to see in much brighter contexts at night. This was essential to their survival.

It is important to understand that the ability to see color was never a necessity for the survival of the cat. In a dark and wooded forest, the cat had a limited use for colour; only bright contrasts that would allow him to successfully hunt his prey.  By Dr Ruan Du Toit Bester