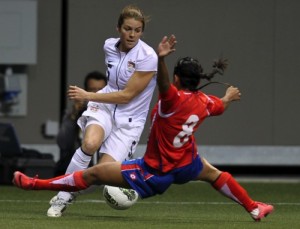 An artificial turf surface at the Women’s World Cup

The law firm that represents soccer players who object to playing on artificial turf at next year’s Women’s World Cup said Wednesday that a FIFA-commissioned survey of players shows that 77 percent feel major tournaments should be played on grass.
The attorneys, who are considering taking legal action in Canada ahead of the tournament, included the results of the survey in a letter sent to soccer’s six international confederations appealing for support. They said that soccer’s governing body led players to believe the results would help inform the decision about which surface to use.
U.S. national team veteran Abby Wambach said that she was among the players that took the survey. Wambach is among a group of U.S. and international players protesting the use of turf at the tournament, claiming it amounts to gender discrimination because the men played on grass.
Not only do soccer balls move differently on natural grass, but injuries are also less likely, players say.
“This is the pinnacle of our sport,” said Wambach, 34, a fixture on the national team since 2003. “As an older player it’s not only my job but my responsibility to make sure the sport be played on the very best surface for the very best tournament of our careers.”
Wambach says that players can’t slide into tackles as they normally would because of potential injuries to their knees and legs, and they certainly risk getting hurt on hard landings from diving headers.
In late July, the players joined in a letter of protest penned to FIFA and the Canadian Soccer Association. The players say that unless their concerns are addressed, legal action could be taken in Canada based on that country’s laws against gender-based discrimination.
No such action has been taken yet, but the letter to the confederations indicates the effort is ramping up.
There has been widespread support for the protest on social media, with such celebrities including actor Tom Hanks and NBA player Kobe Bryant joining in the debate.
“Canadian and FIFA officials need to be transparent about what happened then and what’s happening now. Above all, Canada and FIFA need to fix their mistake and give women’s World Cup 2015 participants the playing conditions they deserve and the law demands,” attorney Hampton Dellinger said.
FIFA did not respond to an inquiry for comment on the survey. The Canadian Soccer Association has deferred all comment to FIFA.
The survey, commissioned by FIFA and conducted by the Sports Technology Institute of Loughborough University, was conducted at the 2013 Algarve Cup and involved 190 elite players from several national teams.
Asked if all matches for major tournaments should be played on grass, 77 percent responded they agree or strongly agree, while 15 percent said they were neutral and the remaining said they strongly disagree.
“It was definitely presented in a way we all knew that was going to — in one way, shape or form — determine what surface we would be playing on in 2015,” Wambach said.
The letter to the confederations also warned against prohibiting players from speaking out on the issue.
“Players must feel free to criticize the gender discrimination proposed for the most important event in their sport and join any legal proceedings necessary to vindicate their human rights under applicable law,” it read.
The letter was sent to the heads of the Asian Football Confederation (AFC), the African confederation (CAF), Confederation of North, Central American and Caribbean Association Football (CONCACAF), the South American confederation CONMEBOL), the Oceana Football Confederation (OFC) and the Union of European Football Associations UEFA).
FIFA altered its rules in 2004 to allow sanctioned matches on certain artificial surfaces. A few games at the 2010 men’s World Cup in South Africa were played on grass that had been reinforced by artificial fibers.
Canada’s bid for the event stipulated that the final be played at Vancouver’s BC Place, which seats 55,000 and has an artificial turf. The games will be played in six stadiums across Canada, in some places where growing and maintaining natural grass is at times tricky. FIFA regulations state that all matches and practices be held on the same surface. AP