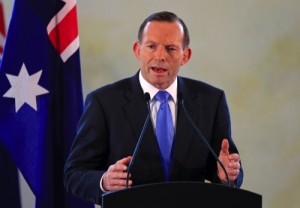 Australia’s prime minister warned yesterday that Australians who fight with the Islamic State group in the Middle East will be “jailed for a very long time” when they return home under a proposed law that would make it an offense to simply visit terrorism hot spots abroad.
Prime Minister Tony Abbott’s government will introduce the proposed law to Parliament today. The legislation is designed to make it easier to prosecute Australian jihadists when they return home from Mideast battlefields and carries sentences of up to life in prison.
“If you fight with a terrorist group, if you seek to return to this country, as far as this government is concerned, you will be arrested, you will be prosecuted and you will be jailed for a very long time indeed,” Abbott told Parliament yesterday.
At least 60 Australians were fighting in Iraq and Syria with Islamic State and another al-Qaida offshoot, Jabhat al-Nursa, also known as the Nusra Front, the prime minister said.
He revealed that more than 60 Australian would-be fighters had had their passports canceled on secret service advice to prevent them from flying to the Mideast.
Dozens of suspected fighters have already returned to Australia from the battlefields. Security agencies fear that they now pose a domestic terrorist threat.
Under current legislation, fighting with terrorists overseas carries a maximum 20-year prison sentence. But few have been charged due to the difficulties in gathering evidence from distant war zones.
Under the proposed law, an Australian would be committing a crime by visiting an area that the foreign minister has designated off-limits.
Attorney General George Brandis said entire countries would not be banned, but specific locations such as the Syrian city of Raqqa, which has become an Islamic State stronghold, might be.
According to draft legislation released late yesterday, entering a so-called declared area would carry a maximum penalty of 10 years in prison. Entering a foreign country with the intention of engaging in hostile activity could incur a life sentence.
The onus would be on an Australian who traveled to a no-go zone to prove that the visit was for an innocuous purpose such as humanitarian work or journalism.
The government rejects criticism that the law would effectively shift the onus of proof from the prosecution under the Australian legal system by requiring defendants to prove they are not terrorists.
Abbott left late yesterday for New York, where he will attend a United Nations Security Council meeting on the multi-nation problem of 15,000 foreign fighters who are in Iraq and Syria. Rod McGuirk, Canberra, AP