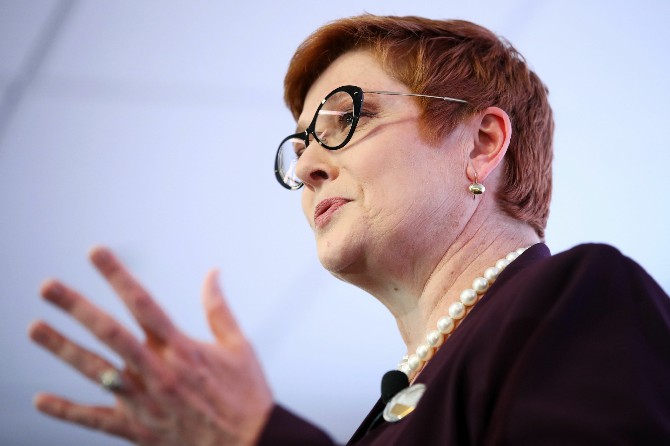 Australian Foreign Minister Marise Payne criticized China for creating “disinformation” during the coronavirus pandemic, saying it “will cost lives.”
“It is troubling that some countries are using the pandemic to undermine liberal democracy to promote their own more authoritarian models,” Payne said in a speech in Canberra yesterday. She cited a European Union report that said foreign actors including Russia and China had spread misinformation, along with Twitter’s ban of accounts linked to alleged disinformation campaigns from China, Russia and Turkey.
“The disinformation we have seen contributes to a climate of fear and division when what we need is cooperation and understanding,” she said.
Payne’s comments may exacerbate diplomatic tensions with China, Australia’s largest trading partner, after she raised Beijing’s ire in April by calling for an independent probe into the origins of the coronavirus that was subsequently backed by the World Health Assembly.
Since then, China has imposed new tariffs on Australian barley and a ban on beef from four meat plants. It also warned its citizens that they risk racist attacks should they study in Australia, raising Canberra’s concerns that the Chinese government was retaliating with “economic coercion.”
Payne yesterday defended her government’s decision to call for the independent probe, which saw Beijing accuse Australia of doing the bidding of close ally the U.S.
She also rejected China’s claims that its students are being singled out for racist attacks. While Australia’s borders are currently closed to non-residents due to the pandemic, the education warning could have a big impact on the economy once travel restrictions are lifted.
Last year, more than 200,000 Chinese students studied in Australia, making it the nation’s largest education services export market. China accounted for 27% of international students in Australia as of March this year, and the higher education sector generated A$15.9 billion ($11 billion) in international student tuition fees in 2018-19, according to research firm IBISWorld.
The Australian government had “repeatedly called out racist behavior,” Payne said, adding that Prime Minister Scott Morrison had gone to considerable lengths to remind Australians that Chinese-Australians returning from China in the early period of the pandemic provided the nation with one of the greatest defenses against the spread of the virus.
Australia’s diplomatic ties with Beijing were already under stress before its call for the virus probe. The government cited Beijing’s “meddling” in national affairs as a catalyst for its anti-foreign interference laws passed in 2018, the same year it banned Huawei Technologies Ltd. from helping build its 5G network.
Payne also said Australia wants a stronger, more transparent World Health Organization that’s more independent.
“We cannot let the vital and practical work that the WHO does on the ground be overshadowed by questions about the approach of its headquarters in Geneva,” she said, adding that the pandemic had exposed the magnitude of consequences if multilateral institutions are not “fit-for-purpose, accountable to member states and free from undue influence.” Bloomberg