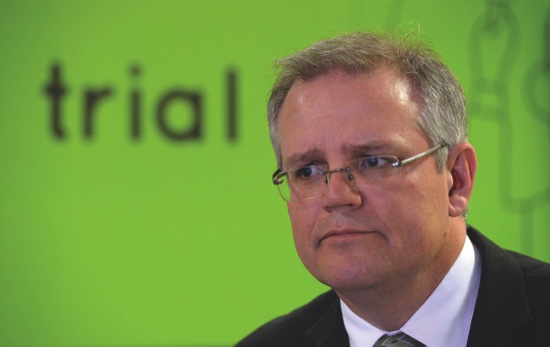 Australia’s government said yesterday it plans to reduce its budget deficit by more than half in three years while maintaining momentum in a sluggish economy with personal and business tax cuts.
Treasurer Scott Morrison revealed that the deficit for the current fiscal year that ends on June 30 is expected reach 39.9 billion Australian dollars (USD30.7 billion). That is AUD4.8 billion worse than was forecast a year ago as the Australian economy has been buffeted by China’s slowing demand for iron ore and coal.
In its latest economic blueprint, the government plans to reduce Australia’s deficit to AUD37.1 billion next year and to AUD15.4 billion by 2018-19.
The net debt, or accumulated budget deficits over time, will reach AUD346.8 billion when it peaks at 19.2 percent of GDP in 2017-18 before it is projected to start to decline.
The government also announced moderate personal tax breaks for Australians earning between AUD80,000 and AUD87,000 and a reduced tax rate for small and medium-sized businesses from July 1 as the economy transitions out of the mining boom that kept Australia out of recession during the 2008 global financial crisis.
The tax rate for businesses with less than AUD10 million turnover would be dropped one percentage point to 27.5 percent from July. The threshold would be progressively increased until all companies were taxed at 27.5 percent by 2023-24. Large companies are currently taxed at 30 percent, one of the highest rates among Organization of Economic Cooperation and Development countries. The government plans to reduce that to 25 percent over a decade.
“This is not a time to be splashing money around or increasing the tax burden on our economy or hardworking Australians and their families,” Morrison told Parliament in delivering his first budget as treasurer.
“Such policies are not a plan for jobs and growth. They simply put our successful economic transition at risk,” he added.
The economic plan might never be realized with a federal election to be held on July 2. Prime Minister Malcolm Turnbull’s conservative coalition will seek a second three-year-term.
Yesterday, Australia’s central bank attempted to jolt the economy by reducing its benchmark interest rate by a quarter point to a new record low of 1.75 percent. The move was prompted by negative inflation in the March quarter when prices fell 0.2 percent from the previous quarter.
Growth is forecast to remain steady at 2.5 percent in the next fiscal year and accelerate to 3 percent in 2017-18.
Unemployment is tipped to fall from 6.1 percent this year to 5.75 next year before plateauing at 5.5 percent from 2017-18.
The government also plans to increase the tax burden on the wealthiest Australians, multinational companies and cigarette smokers.
The government plans to introduce a new 40 percent penalty tax rate for multinational corporations that attempt to shift their Australian profits offshore to avoid paying tax.
A new Tax Avoidance Taskforce with 1,300 specialist staff within the Australian Taxation Office is expected to raise an additional AUD3.7 billion over four years from investigations into multinationals, businesses and wealthy individuals.
Annual hikes in tobacco tax from September next year are expected to raise AUD4.7 billion over three years.  Rod McGuirk, Canberra,AP