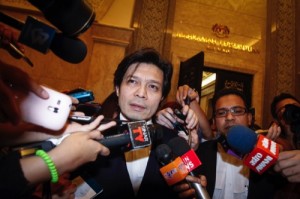 Kamarul Hisham Kamaruddin, center, defense lawyer for one of the accused, speaks to the media after the verdict to restore the death sentence against Azilah Hadri and Sirul Azhar Umar for the murder of Altantuya Shaariibuu at the Putrajaya court of appeal outside Kuala Lumpur, Malaysia

A fugitive detained in Australia has created a diplomatic problem for the Australian government which cannot by law extradite someone who could face capital punishment.
Sirul Azhar Umar, a 43-year-old former policeman, was sentenced last week to death for the murder of a Mongolian woman who was shot and blown up with explosives in 2006 after her yearlong affair with a friend of Malaysian Prime Minister Najib Razak ended in a messy disagreement.
Sirul fled to Australia before a panel of five Supreme Court judges upheld his conviction and ordered that he be hanged.
Australia’s Department of Immigration and Border Protection confirmed that Sirul was detained in the east coast city of Brisbane on Tuesday.
“The department is aware of the Malaysian authorities’ interest in this individual, however due to privacy reasons cannot comment further,” the department said in a statement yesterday.
Don Rothwell, an Australian National University expert on international law, said if Sirul was extradited, Malaysia would first have to ensure he would not be executed.
“The Extradition Act makes it quite clear that if a person has been sentenced to capital punishment or has been charged with an offense which could lead to the imposition of capital punishment, the attorney general can refuse extradition until such time as appropriate assurances are given that capital punishment wouldn’t be applied,” Rothwell said.
Sirul’s case was particularly complicated because the Malaysian court had already passed sentence, Rothwell said.
“Unless Malaysia was able to give to Australia those assurances, under Australian law extradition would not take place,” he said.
Malaysian Home Minister Wan Junaidi Tuanku Jaafar told the Bernama news agency that Malaysia would consider bringing legal action against Australia, which has abolished capital punishment, if the government refuses to extradite Sirul.
A spokeswoman for Attorney-General George Brandis, who signs extraditions on behalf of the government, did not immediately return a telephone call seeking comment.
Foreign Minister Julie Bishop declined to comment.
Malaysian prosecutor Abdul Majid said last week that Sirul and his police colleague Azilah Hadri, who was also convicted of murder, could appeal to the state sultan to commute their death sentences to life in prison.
The case arises as Australia pressures Indonesian authorities to grant clemency to two Australian heroin traffickers who have been sentenced to die by firing squad.
Bilateral relations were chilled for years after Australian Prime Minister Bob Hawke condemned as “barbaric” Malaysia’s execution of two Australian heroin traffickers, who were hanged under Malaysia’s tough anti-drug laws in 1986.
Sirul and Azilah were initially convicted in 2009 of the murder of Altantuya Shaariibuu but both won an appeal in 2013. The Supreme Court upheld the initial High Court ruling.
The prosecution contended that the murder of Shaariibuu, 28, was ordered by her former lover, Abdul Razak Baginda, a prominent defense analyst, after their affair ended.
The High Court in 2008 acquitted Abdul Razak, a married man and a former confidante of Prime Minister Najib, of charges of abetting the murder. Rod McGuirk, Canberra , AP