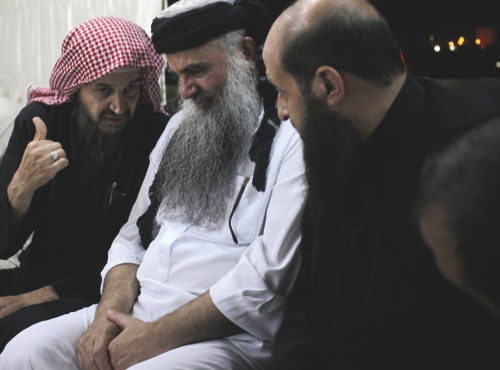 Australia will soon introduce a system to ban foreign “hate preachers” from entering the country and will attempt to outlaw the radical Islamic group Hizb-ut-Tahrir under proposed tougher counterterrorism laws, the prime minister said yesterday.
Prime Minister Tony Abbott said he was angry and frustrated that under existing counterterrorism laws his government could not outlaw Hizb-ut-Tahrir, which is banned in several other countries.
But under amendments currently before the Parliament, groups that promote terrorism would be banned. The current prohibition applies only to groups that engage in terrorism.
Abbott said he did not need new laws to ban hate preachers from traveling to Australia.
“By all means let Australians who want to say stupid things say stupid things, but there’s no point in importing troublemakers from overseas to stir people up and that’s what I want to see in place very, very swiftly,” Abbott told Sydney Radio 2GB.
“We should have a system in place which red-cards these hate preachers and stops them coming to Australia,” he added.
The government currently has the power to refuse visas on general character grounds.
Abbott later said there needed to be better coordination between security and immigration agencies to ensure that all known extremists were refused entry visas.
“Over the years, there have been all sorts of people come in to this country to cause trouble, to make a nuisance of themselves, to stir up Australian against Australian and as far as I am concerned, this will stop,” Abbott told reporters.
“I say to people who want to come to this country from overseas to peddle their extremist ideology, to divide Australian from Australian, to give implicit, if not explicit support for terrorism, don’t bother applying,” he said.
Abbott was reacting to a lecture that Hizb-ut-Tahrir is promoting in Sydney on Friday against U.S.-led combat in Syria. It’s entitled “The War to End a Blessed Revolution.”
The group’s spokesman Uthman Badar said on his Facebook page that the speaker list had not been announced, but all would be locals.
Badar accused Abbott of seeking to “whip up Islamophobic hysteria!”
“We have long exposed government attempts to silence dissent against its unjust and brutal foreign policies and here we now see moves to legalize this silencing of dissent,” Badar said.
Abbott said he would take legal advice on whether Hizb-ut-Tahrir was in breach of the proposed new law, which appears certain to be endorsed by Parliament with the support of opposition senators.
“There is no doubt they are an organization that campaigns against Australian values; that campaigns against Australian interests. They are a thoroughly objectionable organization,” Abbott said.
The Australian government last week approved Australian jet fighters launching airstrikes in Iraq as part of a U.S.-led coalition against the Islamic State group. Rod McGuirk, Canberra, AP