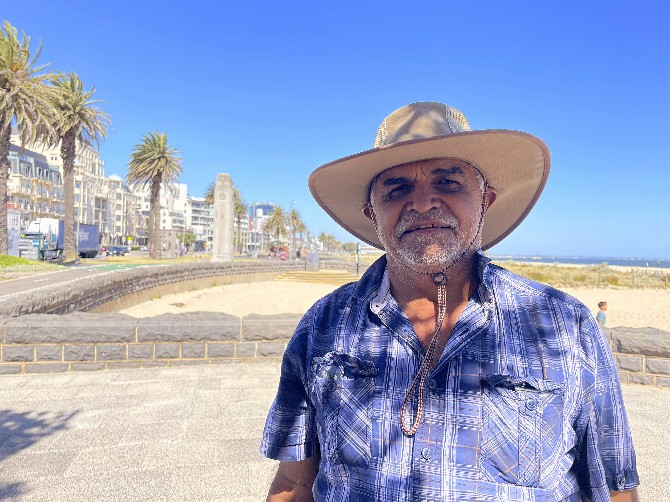 Dennis Fisher poses for a photo in Melbourne in January

An Aboriginal man is taking Australia’s government to court to argue that Indigenous people should have access to their pensions earlier than other Australians because their life expectancy is years shorter.
Dennis Fisher, 64, said yesterday he is taking the action to benefit other Indigenous Australians.
“A lot of us die at a young age,” Fisher said. “If I can help my people somehow, yeah,” he added.
The case was filed in Federal Court in Melbourne last Thursday by the Victorian Aboriginal Legal Service, the Human Rights Law Center and the multinational law firm DLA Piper.
The case will argue that Indigenous people should be able to access their pensions earlier to account for the gap in life expectancy until that gap is closed, Fisher’s lawyers said in a statement.
Indigenous men have a life expectancy of 71 years and Indigenous women 75 years. That’s 8.6 years shorter than other Australian men and 7.8 years shorter than other Australian women.
Australia’s minimum pension age will increase to 67 by July 2023, six months more than the current age and a year older than it was in July 2019. The government is pressuring an aging population to retire later.
Meena Singh, an Indigenous lawyer and senior adviser to the Human Rights Law Center, said Fisher’s test case centers on Section 10 of the Racial Discrimination Act which deals with a group of people that has lesser rights than another group.
Social Services Minister Anne Ruston, who is responsible for pensions, said in a statement her government’s “number one priority is working with Indigenous communities to make the real and practical changes necessary to achieve better life outcomes for Indigenous Australians.”
She pointed to the government’s pledge in August to spend 1.1 billion Australian dollars ($813 million) to address Indigenous disadvantages, including compensation to thousands of mixed-race children who were taken from their families over decades.
Indigenous Australians account for 3% of the population and have poorer health, lower education levels and shorter life expectancies than other ethnic groups. Indigenous adults account for 2% of the Australian population and 27% of the prison population.
Fisher has worked since he was 10, first on a dairy farm that was designed to train Indigenous children to become agricultural laborers.
He was among an estimated 10,000 Indigenous workers who claimed their wages were stolen by the Queensland state government between 1939 and 1972. The government settled a class action in 2019 and Fisher received a share of the AU$190 million ($138 million) payout.
He now holds two jobs in Melbourne as a broadcaster at an Indigenous community radio station and as Aboriginal heritage guide.
In 2008, the Australian Parliament apologized to the Indigenous population for past wrongs since British colonization. The then-government also launched an ambitious Closing the Gap initiative aimed at achieving equality for Indigenous Australians in health and life expectancy within a generation.
But current Prime Minister Scott Morrison’s government scrapped the 12-year-old timetable last year, declaring the policy had failed. ROD McGUIRK, CANBERRA, MDT/AP