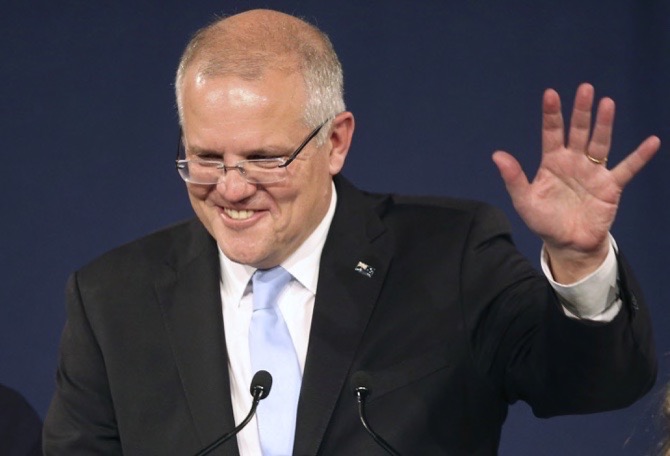 Prime Minister Scott Morrison looked set yesterday to form a majority government as vote counting from Australia’s weekend election allayed fears that his conservative coalition may have to rule in the minority following its shock victory.

The coalition was returned to power in a stunning result on Saturday, after opinion polls and odds-makers had tipped the opposition Labor Party to win. The outcome ranks as Australia’s biggest election upset since 1993, when Labor Prime Minister Paul Keating was returned to power.

With 76 seats in the House of Representatives needed for majority rule, figures from the Australian Electoral Commission yesterday showed that with around 84% of votes counted, the coalition was on target to win 78 seats — an increase of five after going into the election as a minority government.

The Labor Party was set to claim 67 seats, with independents and minor parties taking six.

Winning a majority of the seats would also allow Morrison’s coalition to appoint the house speaker from its own ranks, rather from among independent or minor party lawmakers.

After being elected in 2016 with 76 seats, the power base of Morrison’s coalition was diminished through a series of by-elections late in its three-year term. One such defeat was triggered by the ousting last August of then-Prime Minister Malcolm Turnbull in an internal party vote.

That move, which ended in Morrison becoming prime minister, caused widespread disgust among Australian voters sorely disillusioned by seeing another one of their leaders replaced without them having a say.

Morrison had become Australia’s sixth prime minister in only eight years. Four such changes had been brought about by lawmakers voting to dump their party’s leader, two each from the coalition and the center-left Labor Party. Morrison’s predecessor, Turnbull, had himself become prime minister in 2015 through an internal party coup that dumped Tony Abbott as leader of the Liberal Party.

Analysts had predicted that the coalition would pay dearly for that latest leadership switch, with Morrison expected to exit after one of the shortest terms as prime minister in Australian history.

Most late surveys showed Labor leader Bill Shorten as having a small but clear lead over Morrison as preferred prime minister, 51% to 49%.

Bookmakers had Labor at odds as short as USD1.16 to $1 to win government, with the coalition as long as $5.50.

As analysts tried to make sense of the outcome, several factors were highlighted.

One of them was the strong and effusive campaigning of Morrison himself, praised by his treasurer, Josh Frydenberg, for having “crisscrossed the country with great energy, belief and conviction” while selling “our economic plan to the Australian people, a plan that resonated with them.”

By contrast, Labor was said to have suffered by campaigning on a long and complex list of initiatives, including an ambitious plan for reducing greenhouse emissions and proposed changes to taxes on income from the stock market, which the coalition attacked as a “retirees’ tax.”

While Shorten insisted after the defeat that it had been right to argue for “what was right, not what was easy,” his deputy leader, Tanya Plibersek, conceded that the party suffered from a campaign platform that was too cluttered.

“Our policy agenda was big. It was bold. And I think perhaps we didn’t have enough time to explain all of the benefits of it to the people who would benefit,” Plibersek said.

Labor’s campaign swung more toward policies than personalities, with Shorten, a 52-year-old former union boss, considered to lack sufficient charisma to win a popularity contest with the effervescent Morrison, a 51-year-old known for his love of family, church and football.

One telling result came yesterday, when high-profile independent lawmaker Dr. Kerryn Phelps conceded defeat to the Liberal Party in the Sydney electorate of Wentworth — the seat vacated by Turnbull on his resignation from Parliament last year. AP