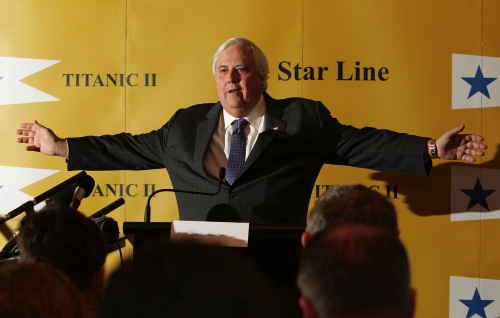 Australian billionaire Clive Palmer during a press conference outlining his plans to build a replica of the Titanic, at The Ritz hotel in central London

A larger-than-life Australian mining magnate turned lawmaker, Clive Palmer, was widely accused yesterday of threatening Australia’s relationship with its biggest trading partner through an extraordinary tirade against China.
The 60-year-old multi-millionaire called the Chinese “bastards” and “mongrels” and accused Beijing of trying to take over Australia during a nationally televised forum on Australian Broadcasting Corp. on Monday night.
The tirade began when Palmer, who was elected to Parliament in October last year, was questioned about a legal dispute between his mining company Mineralogy and its Chinese state-owned partner, CITIC Pacific Mining. CITIC said in court that Palmer syphoned 12 million Australian dollars (USD11 million) to fund his Palmer United Party’s election campaign.
Palmer, whose party forms a powerful voting bloc in the Senate with the support of four senators, said his companies were owed “about AU$500 million by the communist Chinese government that doesn’t want to pay.” He said he was countersuing.
“But it won’t stop the fact that the Chinese government wants to bring workers here to destroy our wage system; it won’t stop the fact that they want to take over our ports and get our resources for free,” Palmer said.
Palmer said CITIC had shipped AU$200 million in iron ore from Australia without paying royalties to Western Australian state, a claim the state premier denied.
“I don’t mind standing up against the Chinese bastards and stopping them from doing it,” Palmer said.
Palmer said his companies already had three federal and supreme court judgments “against these Chinese mongrels.”
“I’m saying this because they’re communist, they shoot their own people, they haven’t got a justice system and they want to take over this country, and we’re not going to let them do it,” Palmer said.
Palmer said on his Twitter account yesterday his comments were “not intended to refer to Chinese people but to (a) Chinese company which is taking Australian resources & not paying.”
Foreign Minister Julie Bishop said yesterday that she would personally tell the Chinese Embassy that “these views are not representative of the Australian Parliament and I don’t believe representative of the Australian people.”
“Mr. Palmer’s comments are offensive, they are unnecessary and it is unacceptable for a member of Parliament to make such comments, particularly on a national television program,” Bishop told Melbourne Radio 3AW. “I think he’s using his position to demean the Chinese people because he’s in a legal dispute with a Chinese company.”
Treasurer Joe Hockey described Palmer’s tirade as “hugely damaging.”
“He is in a very obvious legal dispute with his Chinese partners, but I’d say to Mr. Palmer, please don’t bring down the rest of Australia because of your biases,” Hockey told reporters.
Agriculture Minister Barnaby Joyce described Palmer’s comments as Australia finalizes a free trade deal with China as “not helpful.”
Western Australia Premier Colin Barnett described Palmer’s comments as “offensive, abhorrent and damaging” to his iron ore-rich state and Australia’s long-standing relationship with China.
“CITIC Pacific has paid all royalties owed to the West Australian government on time and in full,” he said.
“The royalties Mr. Palmer is referring to are payments owed to him and his private companies, not royalties owed to the state government…” he added.
CITIC spokesman John Gardner declined to comment.
Palmer was a major donor to Australian conservative politics before he decided to bankroll his own political party.
His headline-grabbing business projects have included building a replica of the Titanic and adding a Jurassic Park-style collection of mechanical dinosaurs to the grounds of his five-star resort. AP