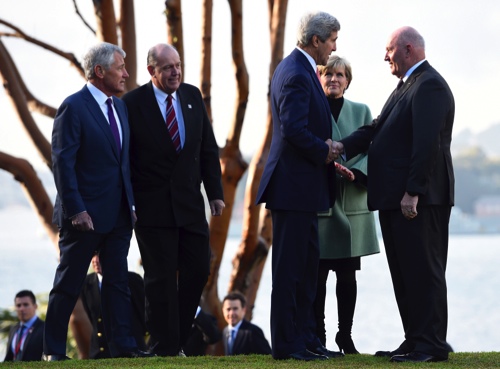 U.S. Secretary of State John Kerry yesterday described a photograph of a Sydney-born 7-year-old boy clutching the severed head of a Syrian soldier as “disturbing” and “grotesque,” and called for international cooperation against the terrorist threat posed by foreign fighters returning home from Iraq and Syria.
The Australian newspaper reported Monday that the image was taken in the northern Syrian city of Raqqa and posted on Twitter by the boy’s convicted terrorist father, Khaled Sharrouf, an Islamic State fighter.
Speaking after a U.S.-Australia bilateral security summit in Sydney, Kerry said the image showed why the Islamic State group posed such a threat to the world.
“This image, perhaps even an iconic photograph … is really one of the most disturbing, stomach-turning, grotesque photographs ever displayed,” Kerry told reporters.
“Of a 7-year-old child holding a severed head up with pride and with the support and encouragement of a parent, with brothers there,” he said. “That child should be in school, that child should be out learning about a future, that child should be playing with other kids — not holding a severed head and out in the field of combat.”
Sharrouf, 33, also posted a photograph of his three sons posing with him in matching camouflage fatigues and armed with assault rifles and a pistol with an Islamic State flag as their backdrop.
Kerry proposed that the United States and Australia take the issue of foreign fighters to the United Nations next month so that countries could agree on ways to protect themselves from the threat posed by terrorists returning from Syria and Iraq.
“We are going to work together to assemble a compendium of the best practices in the world today,” said Kerry, calling for support from both the countries where terrorism occurs and those to where the terrorists travel.
Australian Foreign Minister Julie Bishop described the severed head photograph as “truly shocking.”
“A 7-year-old child is involved in this barbarous display of ideology and they’re Australian citizens,” she said, referring to the family. “Our fear is that they will return home to Australia as hardened, homegrown terrorists and seek to continue their work in Australia — and it’s not a concern just of this country.”
Bishop noted that “a significant number” of convicted terrorists would soon be released from Indonesian prisons, raising fears in that country that they will remain radicals.
“It’s a shared issue across Australia, Indonesia, Malaysia, Philippines, Europe, in Pakistan, in Great Britain, Canada — there are a number of countries across the globe reporting instances of citizens becoming extremist fighters in the Middle East,” Bishop said.
Australia last week announced plans to regulate travel to terrorist hotbeds such as Iraq and Syria as part of a raft of counterterrorism measures aimed at addressing the domestic threat posed by Islamic extremists.
Under legislation to be introduced to Parliament in the next few weeks, it would become a criminal offense to travel to designated countries “without a valid reason.”
The Australian government estimated in June that 150 Australians have fought with radical militants in Syria and Iraq.
The domestic terrorism threat posed by homegrown jihadists was a focus of annual bilateral talks yesterday between Bishop, Kerry, U.S. Defense Secretary Chuck Hagel and his Australian counterpart, David Johnston.
Sharrouf used his brother’s passport to leave Australia last year. The Australian government had banned him from leaving the country because of the terrorism threat he posed.
He was among nine Muslim men accused in 2007 of stockpiling bomb-making materials and plotting terrorist attacks in Sydney and Melbourne, Australia’s largest cities.
He pleaded guilty to terrorism offenses and was sentenced in 2009 to four years in prison. AP