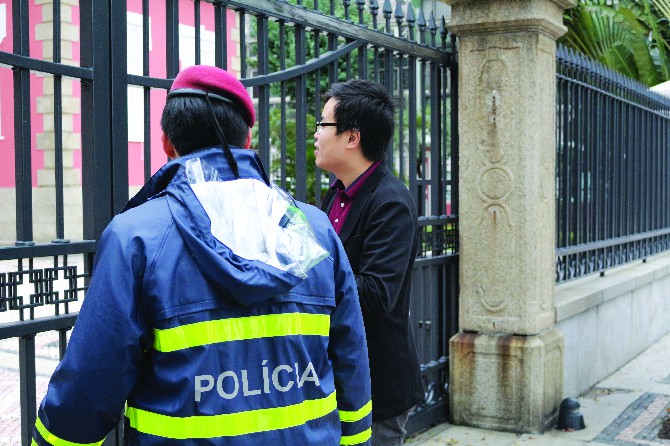 Pro-democracy activist and candidate to this year’s Legislative Assembly elections, Scott Chiang, thinks that judiciary authorities were bending the rules when they found him guilty for the crime of illegal assembly, in the case sentenced by the Court of First Instance (TJB) about two years ago.
“The authorities twisted it and bent the rules a little bit so they could fit the event into the wrong category [and characterize it] as illegal assembly and a hazard to public safety and make a big fuss out of it,” Chiang said. He added that the decision from TSI was not a surprising one.
“Now the narrative has been shifted towards illegal assembly or demonstration, but I wanted to point out that it was just two guys with a piece of paper in the hand trying to deliver it to the residence [of the Chief Executive (CE)]. It is as simple as that,” he said.
“I have tried many times [after this event] to pass in front of the [CE official] residence back and forth and I had no problem in doing that. So the only difference I can perceive is regarding the content of the piece of paper and the recipient of it.”
Chiang’s comments came on the sidelines of the delivery of a different petition on Tuesday to the government on another topic and were prompted by the news of the Court of Second Instance’s (TSI) decision late last week, which dismissed Chiang’s appeals from that sentence and upheld the original sentence.
For Chiang, what was thrown into question in this case was the liberty of any citizen to deliver a message to the government’s highest official, a form of communication and expression that should be championed by the law.
Chiang noted that the accusations were based on the disruption caused by his actions. “As I pointed out both inside and outside the court, there were more police officers on-site than citizens – even more than journalists – so how was I the one blocking traffic? Who was making the trouble out of nothing? It was not me!” he rhetorically asked.
Questioned on his feelings about the final verdict from the courts, Chiang said, “I would like to say that I don’t agree with the verdict but that I respect the decision from the court. But respect is a very strong word to me so I choose not to use it this time,” he concluded.
On May 14, 2019, he was found guilty by TJB in a retrial for the crime of illegal assembly. He was ordered to pay a fine of 24,000 patacas.