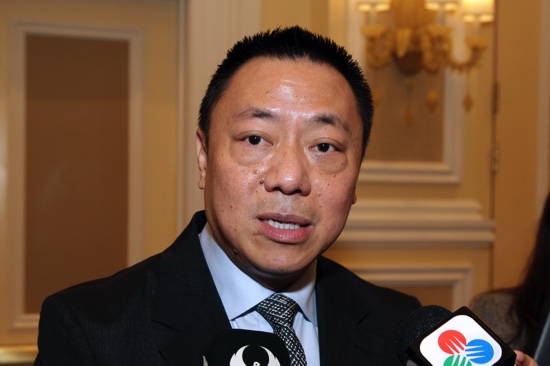 The Secretary for Economy and Finance, Lionel Leong, has pledged that local regulators will closely monitor the transactions made through the Chinese payment service Alipay, along with the company’s growing operations in the region, to ensure legal money inflow.
It was expected that the operation of the service, which is an affiliate of Chinese e-commerce giant Alibaba Group, will expand citywide after a partnership was reached with the Macau Pass in July.
In the meantime, concerns also emerged over Alipay’s expansion into casinos. The official told media on the sidelines of a function yesterday morning that, as yet, no casino had been found to be among those business operators accepting payments made through the service.
Earlier, Union Gaming analyst Grant Govertsen had, in his estimates, already ruled out the possibility of casinos’ involvement in the third-party payment service.
Currently, up to 107 stores are within the citywide network that accepts third-party transactions of no transaction higher than RMB5,000 each time, and RMB50,000 each month.
The secretary welcomed this collaboration along with others of its kind, which he thought helped to push for the development of domestic e-commerce, and to encourage the regional economy.
In a move which should theoretically alleviate fears, China UnionPay has rolled out a nationwide campaign to clamp down on the rampant abuse of its payment system, the South China Morning Post (SCMP) reported.
The new policy requires official registration for mobile “point of service” (POS) transaction devices countrywide.
As a result, all the mobile devices possessed by the licensees will have to be registered for use, while manufacturers are required to seek validation from UnionPay for the devices they produce.
The SCMP report said that the move was expected to significantly impact the region, given the MSAR’s long record of illicit use of such machines. From time to time, the police would uncover rigged POS terminals among retailers, with these faulty machines able to turn offshore transactions into onshore ones on record.
A local gaming industry consultant was also cited as saying that the tightened policy would be “beneficial for the industry in the longer run,” despite delivering a short-term blow to it in terms of earnings.
“This is clearly a key step towards ensuring a better regulated environment for Macau’s gaming industry,” the consultant told the HK newspaper. “These abuses have been going on for way too long and have to stop.”
The reports also said that offenders would face authorities’ sanctions if found breaching the new rules. From next year, the Macau government will allow overseas cash withdrawals from UnionPay to be double the current limited amount of RMB50,000. AU