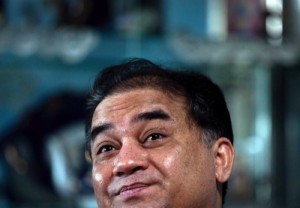 For more than a month, Chinese authorities have shackled the ankles of an outspoken minority Uighur scholar accused of separatism while he awaits trial, his lawyer said yesterday.
The treatment of Ilham Tohti, an economics professor, is rare and unnecessarily harsh, his lawyer, Li Fangping, said.
Tohti was arrested earlier this year in Beijing amid rising tensions in the western region of Xinjiang between the minority Muslim Uighurs and majority Han people. Tohti is awaiting trial in Urumqi, the regional capital, on charges of splitting the country.
Authorities have blamed the deadly conflicts in Xinjiang on terrorists seeking separation, and they have accused Tohti of fanning ethnic hatred and advocating independence in the region.
Tohti, who has openly spoken on the problems with China’s ethnic policies, has rejected the accusations.
Authorities put shackles on Tohti’s ankles on Aug. 9, and they have remained there ever since, even when he goes to sleep, he told Li.
The prosecuting attorney’s office argued that Tohti should be restricted because he had coughed to disturb fellow inmates, which led to scuffles with them, according to Li, who has reviewed materials provided by the prosecutors.
Calls to the Urumqi police and its detention center rang unanswered yesterday.
Shortly after he was detained, Tohti went on a hunger strike for 10 days in January to protest being served food that did not follow Islamic dietary laws, Li has said.
The scholar was denied food for 10 days in March after an attack by suspected Uighur militants outside a train station killed 29 people in the southern city of Kunming, Li said earlier. AP