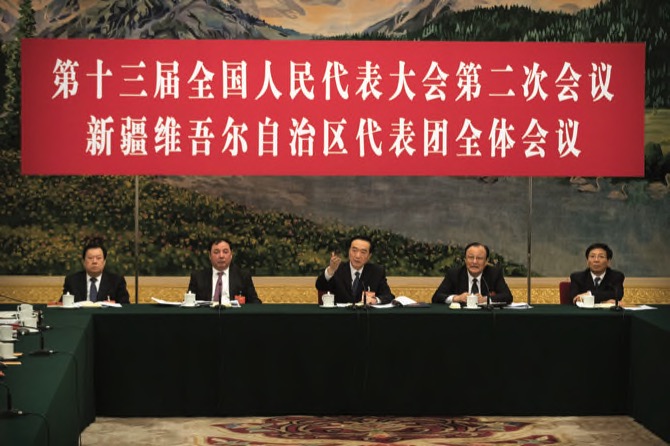 Officials from China’s predominately Muslim region of Xinjiang defended mass detention camps as necessary to fight terrorism and vowed to maintain the crackdown for a “long time.”

Local security policies had prevented a major terrorist attack in the region for more than two years, Xinjiang government chief Shohrat Zakir told a regional delegation meeting in Beijing yesterday. Even so, he said it was still too early to relax the campaign because separatism persisted in the region, which borders Afghanistan and Kazakhstan.

“The fight against instability, extremism and secessionism is long, complex and intense,” Zakir told the public question session, held on the sidelines of the annual National People’s Congress. “We can’t relax for a moment at any time.”

The remarks represent the party’s latest effort to explain the mass detentions, which have become a major source of criticism from Western governments and human rights advocates. Academic estimates, which United Nations officials have deemed credible, suggest that authorities are holding as many as 1 million ethnic Uighurs and Kazakhs in “transformation through education” camps — or roughly 10 percent of the regional population.

The European Union has condemned the practice and U.S. lawmakers have called for sanctions on top Chinese officials including regional Communist Party chief Chen Quanguo, who participated in yesterday’s session. Some Muslim-dominated countries have begun to criticize China, with Turkey’s foreign ministry calling the “concentration camps” a “great embarrassment for humanity.”

During a 10-day tour of the region in November, Bloomberg News observed a pervasive security system, including mass anti-riot drills, facial recognition scanners outside markets and checkpoints every few blocks. Many Uighurs appeared too scared to speak, although some disclosed concerns about being sent to “study” for as long as three years.

The Xinjiang delegation’s room in the Great Hall of the People in Beijing was packed with journalists before the question session, underscoring the intense international scrutiny on the region. Such events held during the annual parliamentary session are often the only time top Chinese officials answer public questions.

Chinese officials have in recent months sought to defend the practices, codifying the use of “vocational training centers” in local regulations and inviting foreign diplomats on supervised tours. Zakir, an ethnic Uighur, told the official Xinhua News Agency in October that the regional government was “protecting the basic human rights of the citizens from the harm of terrorism and extremism.”

He echoed those remarks, disputing the term “re-education centers” and comparing the vocational facilities to boarding school. Zakir said that the policies didn’t target any ethnic group.

China’s crackdown on the region began after a series of Uighur attacks on civilians starting in 2013, including a flaming car attack in the heart of Beijing: Tiananmen Square. The escalation alarmed authorities who had repeatedly attempted to pacify Xinjiang, most recently after 2009 riots in Urumqi killed some 200 people, mostly Han Chinese.

“In order to restore peace for the people, we have implemented the principle of putting prevention first and combining punishment with prevention,” Zakir said. “Xinjiang has cracked down on violent and terrorist crimes, and taken measures to prevent some people from becoming perpetrators of these acts.” Bloomberg