Aviation | Suspended Jetstar Macau-Hanoi route due to be relaunched soon 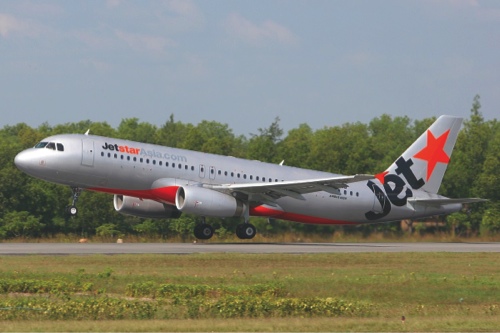 The Jetstar Pacific Airlines daily flight between Macau and Hanoi, launched in March this year, was suspended after violence escalated in Vietnam over a disputed oil drilling area that was claimed by both Vietnamese and Chinese authorities. A Macau International Airport Company Limited (CAM) representative told the Times that the Macau-Hanoi route was only suspended temporarily due to concerns for safety and is due to be re-launched soon.
“[The airliner] only suspended it temporarily. They will be re-
launching it soon,” CAM said, adding that Jetstar stopped operating the route as “it was not safe,” taking the political situation and violent clashes into consideration.
Nevertheless, the company continued operating the flight between Macau and Da Nang, adding more flights to this route.
The Times tried to contact Jetstar for further details, but received no response by press time.
The Center for Aviation (CAPA) – a company providing market analysis on the aviation industry – reported recently that not only flights from Macau to Vietnam were suspended. A Vietjet flight between Hanoi and Bangkok was also suspended after one year of operations.
The Jetstar website states that there are no available flights for the Macau-Hanoi route. No further details are provided.
The Ministry of Transport in Vietnam sent a report to the Prime Minister recently, advocating for assistance policies addressing local airlines affected by the political tensions between Vietnam and China.
News website VietnamNet English reported that the aviation market has suffered with rising tensions between Vietnam and China. Vietnam Airlines is one of the most affected airliners, after it cancelled 13 air routes to 12 destinations in China between mid-May and the end of October.
The news website also reported that Jetstar Pacific suffered losses as well, after several flights between Vietnam and Macau were cancelled between May and June.
Furthermore, the Airport Corporation and Air Traffic Management Corporation in Vietnam lost fee revenue as many foreign airlines canceled flights to the country.
Measures to help airline companies cope with recent losses included allowing Vietnam Airlines to develop intercontinental air routes, as well as offering 25 percent discounts on air traffic management fees to domestic carriers such as Vietjet Air and Jetstar Pacific.
Violence in Vietnam escalated last May over China’s positioning of a USD1 billion oil rig, under development in a part of the South China Sea that was claimed by Hanoi.
Thousands of Chinese nationals were evacuated from Vietnam, news agency Xinhua reported in May. The evacuation followed intense days of clashes between Vietnamese rioters and Chinese citizens living and working in Vietnam.
The Macau-Hanoi route was launched on March 28 this year, providing two daily services between Macau and Da Nang, and one daily service between Macau and Hanoi.