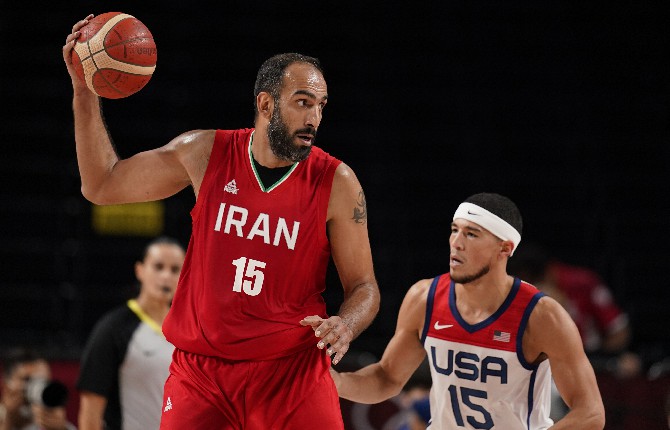 The Americans applauded the Iranian national anthem. The Iranians applauded the U.S. anthem. There were a few handshakes before, plenty more handshakes after, and words of sportsmanship between the sides throughout the game.
For two hours, it was basketball diplomacy.
It’s still somewhat rare for the U.S. and Iran — nations that haven’t had diplomatic relations for more than four decades and often are at vastly different ends of the political spectrum — to get together in anything, from sporting events to nuclear talks. It happened yesterday at the Tokyo Olympics, the U.S. easily prevailing 120-66 in a result that might soon be forgotten but a scene that may be long remembered.
“In general, I think people in different countries get along a whole lot better than their governments do,” U.S. coach Gregg Popovich said.
That seemed to be the case yesterday, anyway.
Popovich shook hands with Iran coach Mehran Shahintab and members of his staff both before and after the game, complimenting the way the overmatched Iranians — a group with one former NBA player against a team of 12 current NBA players — performed in his postgame remarks both on and off the floor. To him, there was nothing unusual about exchanging pleasantries.
“People are different,” Shahintab said, “and separate from politics.”
It’s been 41 years since the U.S. and Iran severed diplomatic relations, a move that came a few months following the Iranian takeover of the American Embassy in Tehran on Nov. 4, 1979 and sparking what became a 444-day hostage crisis. There have been crippling economic sanctions levied on Tehran by Washington and a unilateral withdrawal from the world powers nuclear deal by former President Donald Trump, U.S. flags often being burned at rallies and protests in the streets of Tehran, and accusations in recent weeks that Iran has delayed a proposed prisoner swap to force a quick resumption of indirect nuclear talks.
“We continue to believe — and have never held back from noting — that Iran is a bad actor in the region,” White House Press Secretary Jen Psaki said last month. “And they have taken part in and supported and participated in problematic, extremely problematic behavior, in our view.”
But sports are often a unifying force.
Perhaps the most famous example is what is still known as “pingpong diplomacy” — when table tennis players from the U.S. and China played in the early 1970s and essentially began a major mending of relations between the two countries.
The Olympics also tend to create moments that likely wouldn’t happen in the political world. Earlier this week, Shahintab shook hands with the coach of the Czech Republic after a game; that coach, Ronen Ginzburg, is from Israel — a nation that Iran does not recognize.
If political leaders from Iran and Israel shook hands, it would be front-page news. At the Olympics, it happened without fanfare.
“We’re just here to play basketball,” Iran center Hamed Haddadi said. Tim Reynolds, Saitama, MDT/AP