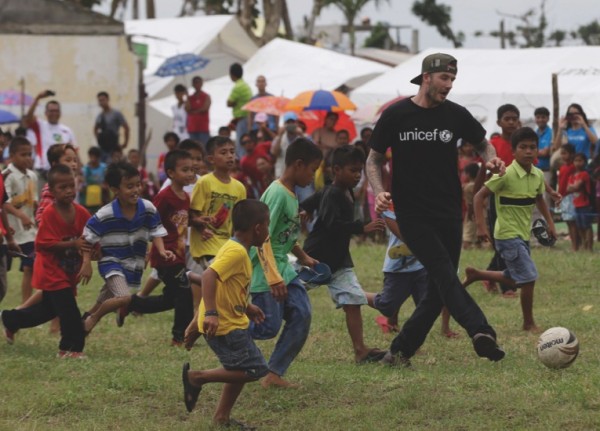 David Beckham turned 40 on Saturday and while memories of his playing days with England, Manchester United and Real Madrid fade, he remains a captivating figure of worldwide interest.
When he ended his playing career on an unglamorous field in northwestern France two years ago, it brought the curtain down on the career of one of the world’s biggest sporting icons.
Since retiring, England’s former captain continues to prosper off the football field, where his multi-faceted life centers on celebrity and fashion, but also ambassadorial roles and an ambitious project to create a Miami team in Major League Soccer.
Here are five things to know about Beckham:

BRAND BECKHAM David Beckham’s earning potential remains potent, even away from football. Beckham topped the Sunday Times Sport Rich List for Britain’s sportsmen in 2013 and placed 11th in the world list headed that year by Tiger Woods. Beckham is now affectionately viewed more as a father and proud dad than a swashbuckling footballer, giving him a more rounded, global appeal.
That appeal has been seized on by Global Brands Group Holding Limited — one of the world’s leading branded apparel, footwear, fashion and lifestyle product companies. In December it announced the launch of a joint venture with Beckham, cashing in on the beaming smile and handsome looks.
Beckham’s appeal matured when he played for Manchester United, Real Madrid and Paris Saint-Germain. He remains sought-after, having signed agreements to promote casinos in Macau and Singapore. Diageo Plc also hired him to help sell Scotch whisky and he promotes sportswear from Adidas.
Beckham’s Footwear Productions company turned over 15 million pounds (USD24 million) in 2013. The figures did not include his shared company with wife Victoria Beckham, a former pop star with the Spice Girls and now a world famous fashion designer in her own right.

A-LIST COMPANY If the company you keep is anything to judge by, Beckham is still a high-roller in the fame stakes.
Guests at his 40th birthday bash, to be held in the luxurious Amanjena resort just outside the ancient Moroccan city of Marrakech on Saturday, are reported to include Hollywood actor Tom Cruise and director Guy Ritchie, and star TV chef Gordon Ramsay.
A few months back, Beckham was at the Parc des Princes stadium in Paris — where he finished his playing career with PSG — sitting alongside music celebs Jay Z and Beyonce and former French president Nicolas Sarkozy as they watched Beckham’s former teammates take on Barcelona.

FALTERING FRANCHISE Not everything goes smoothly for Beckham, who drew England’s wrath when he was red-­carded playing for England against Argentina at the 1998 World Cup.
His venture into Major League Soccer, with plans for a Miami team under the south Florida sun, is proving problematic.
While MLS announced a deal with Beckham for a Miami team in January 2014, no timetable has been set because of the lack of a stadium. There has been stiff opposition to the move. A coalition of politicians and businesses led by Royal Caribbean Cruises opposes building a stadium at Port Miami.
Two months ago, the Miami-Dade County Commission agreed to offer Beckham a county-owned parcel site near Marlins Park. But Beckham’s group — called Beckham Miami United — has expressed strong preference for a downtown location.

BECKS THE AMBASSADOR While playing for Paris Saint-Germain in the final months of his professional career during the 2012-13 season, Beckham was already locking down future roles working as an ambassador.
The biggest of those is with British broadcaster Sky, reportedly worth 20 million pounds ($31 million) over five years. The former England captain’s work involves encouraging the growth of grassroots sport across the United Kingdom and Ireland. He has also been appointed to the Sky Academy, launched to create opportunities for young people in sport, arts and television.
He has also been working as global ambassador for Chinese football, helping the image of the country’s game by promoting it domestically and internationally.
Beckham in formal mode is not such a rare sight. He was previously an ambassador for the 2012 London Olympics and worked with England on its flawed bid to host the 2018 World Cup, which Russia won. 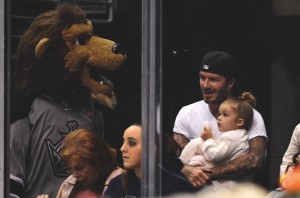 Beckham sits with his daughter, Harper, as Los Angeles Kings mascot Bailey visits while they watch the Kings play the Anaheim Ducks during the first period of an NHL hockey game

THE FAMILY MAN London-­born Beckham’s career took him from Manchester, to Madrid, Milan, Los Angeles and — briefly — to a luxurious Parisian hotel.
After playing his last game for Paris Saint-Germain two years ago, Beckham relocated to England. It was here that David and Victoria Beckham — who is 41 — first bought a mansion, dubbed Beckingham Palace by British tabloids that have followed his every move for years, soon after they married in 1999.
The first three of their four children — Brooklyn, Romeo, Cruz and Harper — grew up there before the family moved to Spain in 2003 when Beckham joined Real Madrid.
After four years in Madrid, the Beckhams moved to Los Angeles, where Beckham played for LA Galaxy until 2012, interspersed with loan moves to Italian giant AC Milan in 2009 and 2010.
Early last year, they sold the Hertfordshire mansion — which included seven bedrooms, a football pitch and even a maze — for 11 million pounds ($17 million) and relocated to London, where they live in the posh neighborhood of Kensington in a house costing more than 30 million pounds ($46 million).
That proved a convenient location for 16-year-old Brooklyn, their eldest child, when he trained with English Premier League side Arsenal’s academy team earlier this year. By Jerome Pugmire, Paris, AP