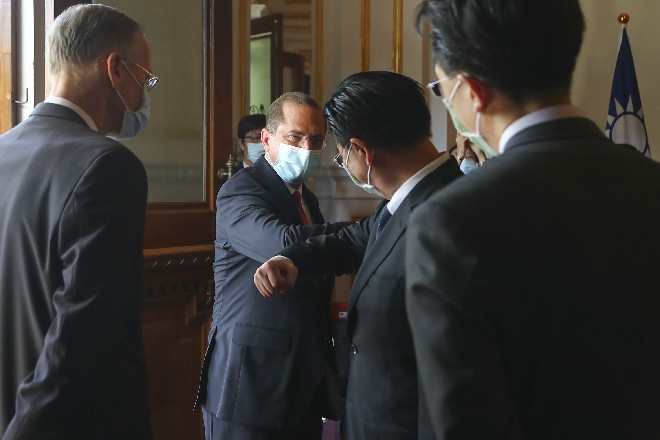 U.S. Health and Human Services Secretary Alex Azar (second from left) is greeted as he arrives at a memorial for former Taiwanese President Lee Teng-hui in Taipei

A Chinese official lashed out at U.S. Health and Human Services Secretary Alex Azar yesterday for visiting Taiwan amid an ongoing pandemic back home, accusing him of putting politics ahead of the lives of the American people.
The comments came a day after Azar accused China of failing to warn the rest of the world about the coronavirus.
“He abandoned the millions of people who are struggling with illness and visited Taiwan instead to stage a political show,” Foreign ministry spokesperson Zhao Lijian said at a daily briefing. “We don’t know how he has the confidence and courage to shamelessly criticize China’s anti-epidemic achievements.”
Speaking Tuesday in Taiwan, Azar said that China’s ruling Communist Party “had the chance to warn the world and work with the world on battling the virus.”
“But they chose not to, and the costs of that choice mount higher every day,” he said.
The Trump administration has repeatedly accused China of withholding information from the World Health Organization and the international community as the virus began to take hold. China denies the charge, saying it communicated information as soon as it had it.
Azar’s trip to Taiwan angered China because it considers the self-governing island part of its territory. He is the highest-ranking official to visit since the U.S. cut formal diplomatic ties in 1979, switching recognition to Beijing as the government of China.
yesterday, Azar visited a face mask factory and paid respect to the recently deceased former Taiwanese president, Lee Teng-hui, before leaving Taiwan. AP