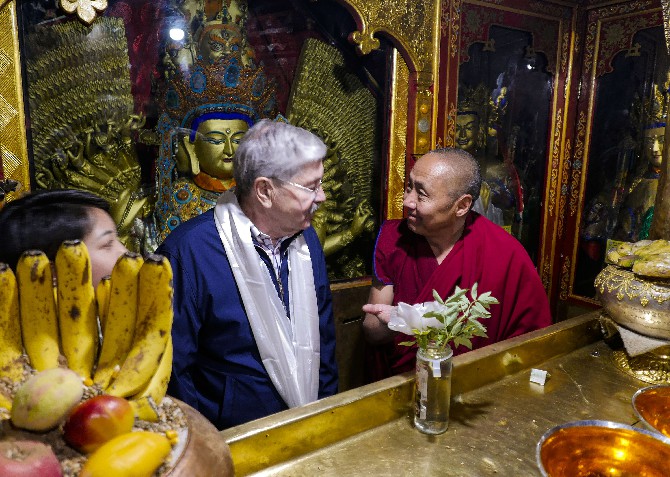 China said yesterday it will impose visa restrictions on U.S. individuals following the Trump administration’s imposition of travel bans on Chinese officials it accuses of restricting foreigners’ access to Tibet.
Chinese Foreign Ministry spokesperson Zhao Lijian said the move would target “U.S. individuals with egregious conduct related to Tibet issues” but gave no specifics.
“We urge the U.S. to stop interfering in China’s internal affairs with Tibet-related issues … so as to avoid further damage to China-U.S. relations,” Zhao told reporters at a daily news briefing.
While China encourages travel to the Himalayan region, it has adopted “certain management and protection measures for foreigners visiting Tibet in accordance with law and regulations,” along with consideration for Tibet’s “special geographical and climatic conditions,” Zhao said.
The Trump administration announced its new travel ban on Tuesday, hitting an unspecified number of Chinese officials with visa restrictions, limiting or entirely eliminating their ability to travel to the United States.
In announcing the restrictions, Secretary of State Mike Pompeo accused China of systematically obstructing the travel of foreign diplomats, journalists and tourists to Tibet while Chinese visitors “enjoy far greater access to the United States.”
“Access to Tibetan areas is increasingly vital to regional stability, given (China’s) human rights abuses there, as well as Beijing’s failure to prevent environmental degradation near the headwaters of Asia’s major rivers,” Pompeo said.
The statement did not name any of those targeted nor did it give a number of those affected but said it the ban would be applied to Chinese government and Communist Party officials who are found to be “substantially involved in the formulation or execution of policies related to access for foreigners to Tibetan areas.”
China requires special permits for foreigners to visit Tibet, where human rights activists say Beijing has engaged in a decades-long campaign to suppress local culture, the Buddhist religion and minorities.
The latest U.S. move comes as it wages concurrent battles over Beijing’s policies in Hong Kong, human rights in western Xinjiang province, global trade practices and aggressiveness in the South China Sea.
China claims Tibet has been part of its territory for centuries, although many Tibetans say their land was essentially an independent country for most of that time. Communist forces occupied the region following their seizure of China in 1949 and 10 years later crushed an abortive uprising, sending spiritual leader the Dalai Lama, and more than 80,000 Tibetans into exile in India and other countries. AP