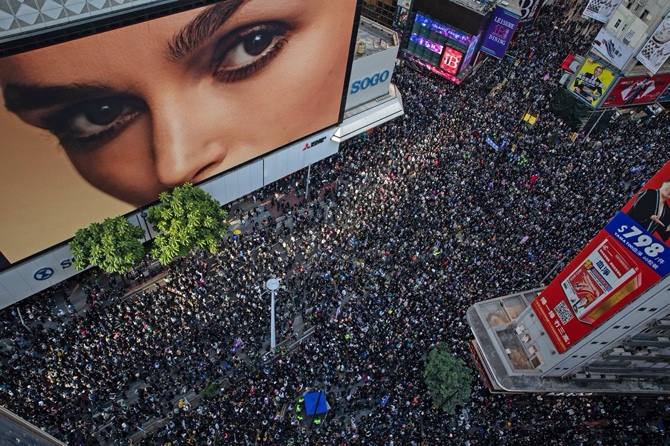 Hong Kong saw its biggest pro-democracy protest in months Sunday, signaling more unrest to come in 2020 as the movement that began in June to fight China’s increasing grip on the city shows its staying power.

Hundreds of thousands of demonstrators flooded the city’s major downtown boulevards, many waving U.S. flags, singing protest anthem “Glory to Hong Kong” and chanting “Five demands, not one less.” The march drew a cross-section of Hong Kong society – from parents with young kids to senior citizens – and was largely peaceful throughout the afternoon, although tensions emerged between riot police and some radical demonstrators at night.

Protesters’ calls to disrupt yesterday’s commute and workday, however, hadn’t materialized as of late morning.

The Sunday rally was the first organized by the Civil Human Rights Front to get police approval since August, prompting many Hong Kong residents who normally wouldn’t risk joining an illegal assembly to hit the streets. The organizer said about 800,000 were at the rally, while police estimated 183,000 joined at the peak of the protest. The show of strength followed a landslide victory for pro-democracy forces in local elections last month.

“Yet another breathtaking display of Hongkongers’ political might,” said Claudia Mo, a pro-democracy lawmaker who joined the march on Sunday. “By now it’s obvious the Hong Kong fight will go on, we will soldier on,” she said. “This may last for the generations to come.”

Carrie Lam – Hong Kong’s leader backed by Chinese President Xi Jinping – has refused to give in to demands including an independent inquiry into police violence and meaningful elections for the city’s top political positions. The demonstrations have maintained popular support even as the economy has slid into a recession.

“Should Carrie Lam or the Beijing regime continue to ignore the outcry, Hongkongers will continue to resist the government by peaceful and not-so-peaceful means,” said Fernando Cheung, another opposition lawmaker.

The protesters have sought to keep the pressure on the government with a combination of peaceful mass marches, like the one on Sunday afternoon, and more violent actions like shutting down transport networks, vandalizing mainland-linked businesses and seizing universities. Police have made more than 6,000 arrests, while coming under fire for abuses in seeking to contain the demonstrations.

Earlier on Sunday, police said they arrested 11 people while seizing a semi-automatic hand gun, bullet-proof jackets, retractable batons and pepper spray in a raid. They suspected an “extreme” group of people would try to attack police or “create chaos” during the rally.

While the protest was largely peaceful, the police said yesterday that some had blocked streets in the evening, spray-painted walls of the High Court and vandalized shops in the Causeway Bay shopping district, “seriously challenging the spirit of the rule of law.”

Yesterday, the Hong Kong Bar Association said it “deplores in the strongest possible terms the acts of arson and vandalism” at the court. “As shown by the many thousands of people who participated in the march yesterday, views can be most powerfully conveyed through peaceful means,” the group said.

The MTR Corp., the city’s railway operator, said it was adding more train captains for some services to ensure there aren’t any foreign objects on the rail tracks. It also said rides on the East Rail Line would be longer than usual. Some track-side equipment was destroyed at the University Station and trains are expected to travel at a slower speed.

Lam’s government withdrew a bill allowing extraditions to the mainland that originally sparked the protests, and called for dialogue on the other demands. China has sought to portray the issues as largely economic in nature, while refusing to offer a political solution.

On Saturday, Lam got some support from hundreds of pro-government demonstrators who gathered in the centrally located area of Wan Chai. They waved China and Hong Kong flags while condemning the violent protests and vandalism of the past months.

But Michael Tien, a businessman and pro-government lawmaker, said yesterday that the onus was on Lam to convince the city’s police force and her backers in Beijing that it was time to set up an independent commission of inquiry – a key protester demand.

“Yesterday there was not a lot of violence, so they honored their side of it,” Tien told Bloomberg TV. “Now it’s up to Carrie Lam to give a response.”

Protesters on Sunday vowed to keep on fighting into 2020, when Hong Kong was scheduled to hold elections for the city’s Legislative Council. Kelvin, a 30-year-old salesperson who declined to give his last name, also said the protesters were “building our own economics.”

“I know a lot of businesses take sides, so we are going for the side that supports democracy,” he said. “Our government is not responding to any of them so that’s why we are still here.”

Companies have got caught in the middle of the protests. Chinese retailers and branches of lenders like Bank of China Ltd. have been ransacked by vandals, while Cathay Pacific Airways Ltd. and the National Basketball Association have come under pressure from Beijing after employees supported the demonstrations.

Over the weekend, the heads of the American Chamber of Commerce in Hong Kong were denied entry to Macau and sent back, with no explanation given. “We hope that this is just an overreaction to current events and that international business can constructively forge ahead,” the chamber said in a statement.

Sunday’s large turnout showed that the government was be “living in a fantasy” if they believed the protests would die down, particularly with the holidays of Christmas and the Lunar New Year coming up, said Alvin Yeung, a lawmaker in the pro-democracy camp.

“People are still very eager to fight for what they have been fighting for,” he said. “It’s not the end yet – it’s far from the end.” Cathy Chan, Iain Marlow & Aaron Mc Nicholas, Bloomberg