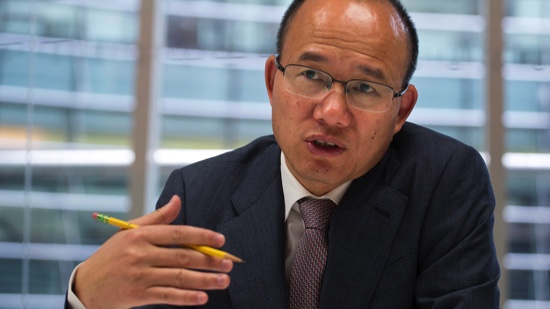 Chinese billionaire Guo Guangchang, who leads Fosun International Holdings Ltd., is assisting judiciary authorities with a probe, according to Shanghai Stock Exchange filing by a company he controls.
Guo had gone missing on Thursday, spurring speculation in the Chinese media that he was helping with a government investigation into former Shanghai vice mayor Ai Baojun, according to people familiar with the situation who asked not to be identified.
The billionaire’s global empire spans everything from insurance and holiday resorts such as Club Mediterranee SA to entertainment through dozens of deals over the past three years. Reports that he couldn’t be reached reverberated through markets, halting shares of many companies linked to his conglomerate.
Guo also has connections to Macau and Portugal, where he has investments in the Tranquilidade and Espirito-Santo Saúde insurance companies among others, as well as interests in the Portuguese electrical company REN.
Shanghai Fosun Pharmaceutical (Group) Co., which is linked to Guo’s conglomerate, plans to resume trading of its shares in Shanghai on Dec. 14 after its suspension on Friday, the company said in the filing. Guo can continue to participate in the company’s major decisions “via appropriate means,” according to the filing. The company is developing drugs, consolidating businesses in China and targeting acquisitions overseas.
Fosun International Ltd., the Hong Kong-listed unit that also stopped trading Friday and will resume today, has USD2 billion of acquisitions announced this year that haven’t been completed. The company is competing for Anglo-German banking group BHF Kleinwort Benson Group and agreed to acquire Israeli insurer Phoenix Holdings Ltd. in June. The company is in the process of acquiring German private bank Hauck & Aufhaeuser Privatbankiers KGaA and is among investors offering to take Chinese movie studio Bona Film Group Ltd. private.
Fosun’s stock tumbled 16 percent to USD1.30 in over-the-counter trading in New York Friday, following a retreat of 11 percent on Thursday. About 166,000 shares traded hands, which is more than 22 times the daily average volume of the past three months.
Guo’s conglomerate spent USD5.7 billion over two years acquiring insurance assets, according to data compiled by Bloomberg. The insurance businesses, such as Portugal’s Cia de Seguros Fidelidade Mundial SA and Bermuda-based Ironshore Inc., provide low-cost funding for acquisitions in other industries.
In August, he said that his company aimed to grow its private banking business to manage more than USD100 billion. In October, the company completed a USD1.5 billion rights offering, with some of the money tagged for mergers and acquisitions in banking and insurance.
Sohu.com reported on Friday that Guo is helping with the investigation into Ai. MDT/Agencies