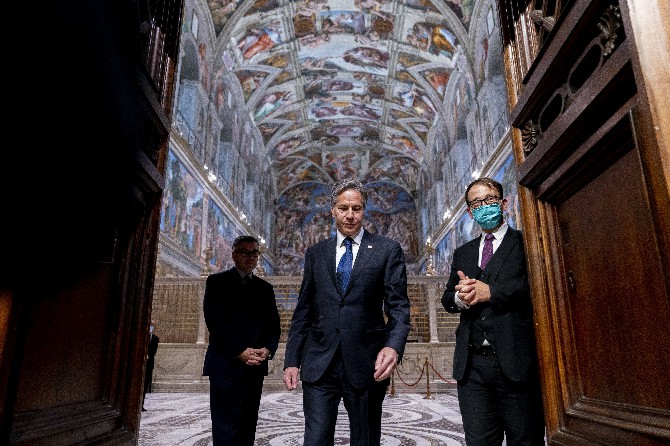 U.S. Secretary of State Antony Blinken yesterday received VIP treatment at the Vatican, getting a private tour of the Sistine Chapel before he sat down for closed-door talks with Pope Francis.
Blinken was the first high-level official of President Joe Biden’s administration to have a private audience with the pontiff.
There was no immediate details from either side about the discussions in the Apostolic Palace.
Last year, when Blinken’s predecessor, Mike Pompeo, came to the Vatican, he wasn’t granted private time with Francis. At the time, Vatican officials said that was because the Holy See didn’t want to give any impression of favoritism only weeks before the U.S. presidential election that brought Biden to power.
But China was a thorny issue between both sides. Pompeo had undiplomatically blasted the Vatican for what he said was a lessening of its moral authority by signing an accord with Beijing over the nominations of Chinese bishops. Pompeo called on the Holy See to take a tougher stand against Chinese restrictions on religious freedom.
Biden, for his part, has criticized China for forced labor practices. Francis has championed human rights in many countries as part of his determination to draw attention to people’s suffering.
But as the bishops’ agreement indicates, Francis is also intent on improving conditions for the Catholic church in China. But some in his own church have expressed dismay that Francis hasn’t taken a harder stance on Chinese authorities’ longtime discrimination against Catholics loyal to the pontiff.
On Monday, Blinken also met with the Holy See’s No. 2, Cardinal Pietro Parolin, who is the Vatican’s secretary of state, and with Archbishop Paul Gallagher, its foreign minister.
Visitors to the Sistine Chapel, with its ceiling frescoed by Michelangelo and a 30-by-60-foot wall painting, “Last Judgment,” by the Renaissance master almost always emerge wowed.
Blinken appeared to be no exception after his short, guided tour to the chapel where popes are elected in secret conclave before he was escorted to his series of meetings in the Palace.
“Mr. Secretary, pretty impressive?” a reporter asked as the U.S. official ended the cultural part of his visit. Blinken nodded and gestured around the cavernous space.
Blinken is visiting Rome before flying to southern Italy for Tuesday’s Group of 20 meeting of foreign ministers, which is focused on improving collaboration among nations on climate change, health issues and development. France D’Emilio, Vatican City, MDT/AP