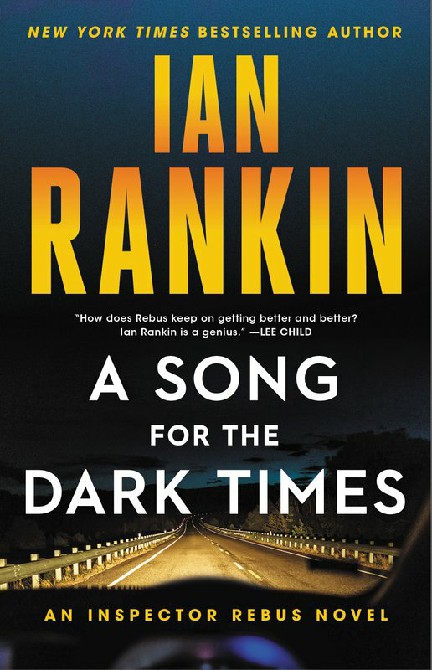 “A Song for the Dark Times,” by Ian Rankin (Little, Brown)

Ian Rankin’s best-known character, John Rebus, typically resides in the dark world of the human soul and things are no different in “A Song for the Dark Times,” Rankin’s newest Inspector Rebus novel.
However, Rebus is an inspector no more and in fact the well retired copper is moving apartments in the opening of the story to a ground floor flat, due to ill health, assisted by trusted friend Detective Inspector Siobhan Clarke.
With a dog named Brillo to mind and boxes — including stacks of old case files — to unpack, the reader might be forgiven for thinking Rebus will be relegated to the sidelines. Not so. The murder of a wealthy Saudi student in Edinburgh, followed by a mysterious missing person case, one with a close family connection to Rebus, has the retiree heading to the Scotland Highlands to investigate.
Rankin’s plot whips between the two cases, like a Scottish gale, with Clarke and team investigating the murder — the case touches on recent real-world events such as Brexit, anti-immigrant violence and the murder of Adnan Khashoggi. Rebus, meanwhile, attempts to mend fences with his partially estranged daughter, Samantha, as he searches for her missing partner and probes possible links to a local commune and an abandoned World War Two internment camp.
The Rebus of “A Song for the Dark Times” is a slightly diminished one — he is drinking less, nor do we find him sparring with local Edinburgh gangster Ger Cafferty, though he does play a role in the drama. The retired detective is a wee bit less enjoyable to read, but he is a familiar character with whom the reader will feel comfortable.
Rebus is still the dogged investigator, able to make intuitive leaps about the dark places that inhabit the human soul and lead some to commit murder, whether in the distant past or in more recent times. Rankin will in time, likely retire Rebus for good, so we should appreciate him while we still have him. JONATHAN ELDERFIELD, AP