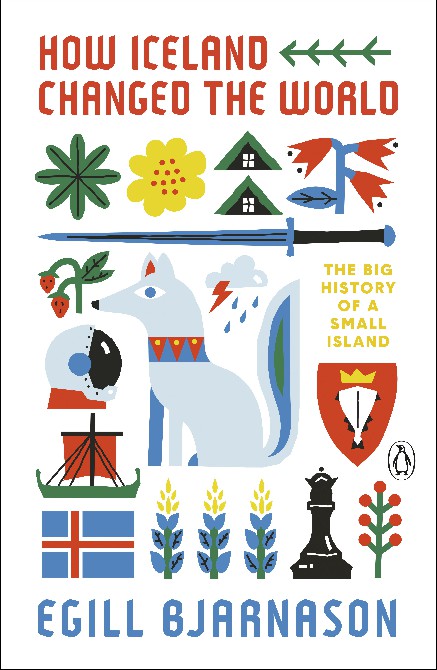 How has small Iceland been able to play such a big role in the world? The confluence of geology, fish and rugged explorers seems to have infused Icelanders with their durable, modest, optimistic and confident character and produced an outsized number of achievers — among them Nobel Prize and Academy Award winners.
However, that cool Icelandic confidence backfired when Icelandic bankers in the early 2000’s financial crash brought shock and shame. But not for long: Iceland is leading the way again, this time with the highest rate of women working full time.
Author Egill Bjarnason in “How Iceland Changed the World: The Big History of a Small Island” views his home island with combination of the wry humor of Bill Bryson, the pointed observations of Anthony Bourdain and the meanderings of a mildly befuddled history professor.
Yes, 31 Icelandic bankers were sentenced to jail terms for crimes in the early 2000’s global financial crash, but as the author points out, the nation learned some unexpected lessons from its shame. Just two of the bankers were women, who assess risk more conservatively than the men, according to a study the author quotes.
Iceland soon followed with the first female bank boss, police chief, wrestling federation leader and sheep farmers association director.
Like a proud dad, Bjarnason explains the superlatives of his homeland and its people.
— One of Iceland’s greatest explorers reached North America 500 years before Columbus.
— Its parliament is the oldest in the world.
— Iceland never has had a military.
— Iceland’s “most universally praised national hero is a dry and colorless librarian.”
— Iceland completed the world’s first national census, “nearly exhausting the nation’s paper supply.”
— In 1980, Vigdis Finnbogadottir became the world’s first woman president elected in a direct vote.
The book drags a bit in the pages about the early Norse going back and forth but we get a window on how a unique topography, climate and position in the world shaped the character of today’s 360,000 Icelanders who live on an island in the North Atlantic about the size of Ohio.
That’s less than the population of Bakersfield, California, best known as an oil and agriculture center at the south end of California’s great Central Valley.
We’re certain to be hearing more about Iceland in the years ahead — the country has become a lab for climate change, losing 309 square miles of glaciers in the last 20 years.
How did the people of a land blessed with such land, volcanoes and vast fisheries become global leaders in so much? We’re left wanting more on the Icelandic psyche but we’re left to draw our own conclusions.
Bjarnason notes that Icelanders “love educational programming” and never in the nation’s history has one of the five political parties gained a majority in parliament. And, he writes, “ideas and trends travel fast in a place where everyone is part of the same conversation.”
Imagine that in America.
JEFF ROWE, MDT/AP