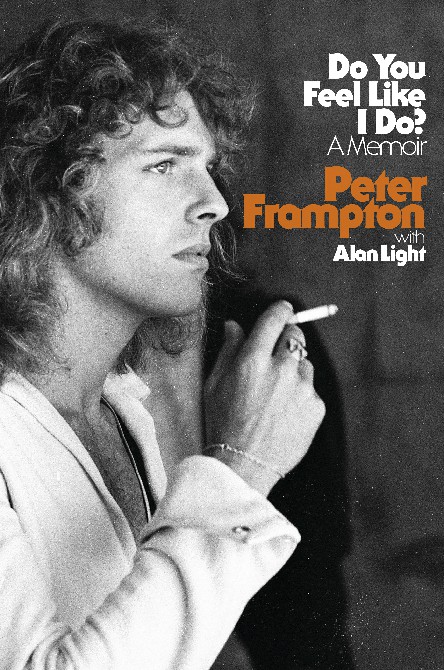 Peter Frampton, “Do You Feel Like I Do?” (Hachette Books)

When Peter Frampton was a child, he busted his father on Christmas morning giving him an acoustic guitar dressed as Santa. “And from 3:30 in the morning on Christmas when I was 8 years old, I haven’t stopped playing since.”
So recalls the singer-songwriter and guitarist whose album “Frampton Comes Alive!” became a monster hit in the mid-1970s in his new memoir, “Do You Feel Like I Do?”
The breezy and polite look back follows an important musical figure’s rise in the 1960s, triumph and fall in the ‘70s and resurrection in the ‘80s. It’s a tale of talent, mismanagement, drugs, loss and redemption.
“Who else has had the career arc, the crazy ups and downs, that I’ve had?” he writes. “I’ve been to the moon and back without a rocket. But I’ve always managed to stay optimistic.”
Frampton finds himself at fascinating moments in rock ‘n’ roll history, a pal of both Eric Clapton and Mick Jagger, aided by David Bowie and, at one point, a potential member of the Rolling Stones. He hung out with The Kinks and recorded with Small Faces.
He was dangled out a fourth floor window by Keith Moon and John Entwistle from The Who. He was serenaded by Eddie Van Halen. He was friendly with Beatles. “I have to say your knees do buckle a bit the first time you meet ‘one,’” he writes.
A profile emerges of an earnest and perfectionist musician — “I’m my own worst critic” — who suffered long-term clinical depression and was a binge drinker. Frampton explains how he came to champion the talk box and how he had three wives.
Frampton began his career as the lead singer and guitarist for the Herd at age 16 and then co-founded Humble Pie. His good looks turned him into a heartthrob. He calls his looks the “bane of my existence” and “it always got in the way.”
He was enjoying some modest success as a solo artist when he followed up his four studio albums with a double live album, buoyed by the hits “Show Me the Way” and “Baby, I Love Your Way.” (He did his first bump of coke while making that live LP.)
Frampton’s prose often suffers from an inability to recognize the wheat from the chaff, spending three times as much time on a few performances with the Cincinnati Ballet as it does on his times with Jagger. He also has a odd lack of curiosity, often ending an anecdote with “I don’t know what happened there” or “I don’t know why.”
His inner guitar geek is on display as he peppers his memories with references to gear — P90 type pickups, Studer 2-track, 3M M79 24-track analog machine. He reveals that he wore satin pants because each pair sold helped fuel his girlfriend’s drug habit. But he’s remarkably diplomatic — bland even — describing his contemporaries.
What was Keith Moon like? “Keith was a lovely man — not when he was out of it, but the rest of the time he was a lovely guy, a very warm person.” What about Jimi Hendrix? “He wasn’t just good, he was amazing.”
He’s a compelling figure on the way down, when he was urged to push out an album too soon to capitalize on “Frampton Comes Alive!” Writes Frampton: “It was so hurtful when everything crashed” and “I should have used the word ‘no’ a lot more.”
He ends the book with his battle with inclusion body myositis, a progressive muscle disorder which threatens to weaken his fingers and, in turn, silence his guitar. But he faces it with the optimism he’s always managed. MARK KENNEDY, MDT/AP